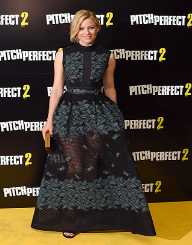 Elizabeth Banks was born on February 10th, 1974 in Massachusetts, Pittsfield, United States. Banks initially began her career as a TV actress. She gained nationwide popularity after featuring in The 40-Year Old Virgin, Spider-Man, Hunger Games and Invincible. In her television career, she starred in the series Scrubs and 30 Rock. Banks runs Brownstone Production Company. Her first debut as a director was with the release of Pitch Perfect 2.

Elizabeth Banks was born in a family of four where she is the eldest. She is the eldest daughter of Mark Mitchell and Ann Mitchell. Mark worked in the general electrics industry while her mother was a banker.

Banks attended Pittsfield High School where she was active in all forms of sporty activities. After being injured while playing softball, she decided to switch her career interest and found it worthwhile to engage in action.

Her new career interest rose steadily as she was now acting in school’s plays. She later graduated from high school in 1992 and joined University of Pennsylvania. After graduating from the university, Banks went to the American Conservatory Theatre where she received her training in drama. Here, she was recognized as a talented stage performer for productions such as “Hurly Burly” and "A Midsummer Night's Dream." In 1998, she earned her MFA degree from the theatre.

Elizabeth Banks gained on-screen experience while living in New York. Here, she worked with production houses in Gotham such as Sex and the City alongside Third Watch. In 2000, Elizabeth Banks changed her last name to ‘Banks.’ The main reasons for doing this was that she did not want to be confused with another actor that was featured in movies such as V. and Lost.

2012 was a year full of success for Banks. She starred in 6 films that were major hits including People Like Us, What to Expect When You're Expecting, Man on a Ledge and The Details. The Hunger Games was the best project for her in her film career. This film amassed over 690 million dollars globally.

While featuring in the movie Pitch Perfect 2, Elizabeth Banks was also was among the directors. Working with her husband Max Handelman, they both started Brownstone, a producing company. The company has produced movies such as Surrogates - 2009 and Pitch Perfect series both in 2012 and 2015.

Elizabeth Banks and her husband Max Handelman met in college and got married in 2003. The two have two sons Felix and Magnus. Their children were born to surrogates.