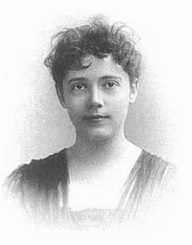 Elizabeth Jane Cochran who was known by her pen name Nellie Bly was born on May 5, 1864. She was an American journalist, inventor, and writer. She was also a charity worker. She was best known for her investigative and undercover reporting. She is considered a pioneer in the field of investigative journalism. She was popularly known for her work on an asylum expose in 1887. During that time she faked insanity to get into a mental asylum, and she was able to report about the horrific conditions of the people with a mental health condition. She is also known for her record-breaking trip around the world in 72 days. She died on January 27, 1922, at the age of fifty seven.

Nellie Bly was born Elizabeth Jane Cochran on May 5, 1864, in Cochran’s Mills, Armstrong County, Pennsylvania. She was born to Michael Cochran who was a mill worker and Mary Jane. She attended a boarding school for one term, but she was forced to drop out of school due to lack of funds. In 1880, her family moved to Pittsburgh where she supported her mother by running a boarding house. Her father died while she was still young.

Nellie Bly's career started without her planning. A column in the daily, The Pittsburgh Dispatch’ prompted her to pen a fiery rebuttal to the editor under the pseudonym ‘Lonely Orphan Girl.’ Her work was so good that it earned her a full time job with the daily newspaper. At that time women writers wrote under pen names, and so she also began writing under the pen name Nellie Bly. She chose the name after Stephen Foster’s song. She mostly wrote about the consequences of sexist ideologies and emphasized the importance of looking into women rights issues. She mostly exposed the poor working conditions that women were subjected to.

Nellie Bly was later pushed by the daily newspaper to the women’s page to cover fashion, society, and gardening. The reason she was forced to that column was that she advocated so much for women rights and how they should be treated with honour and respect. She travelled to Mexico to serve as a foreign correspondent to take her career to the next level. She sent articles that she wrote about the Mexican people and their lifestyle. Her articles were later published as a book known as ‘Six Months in Mexico.’ She was then chased out of Mexico after she wrote articles that criticized the Mexican dictator and ruler, Porfirio Diaz.

Nellie Bly returned to Pittsburgh and continued working for ‘The Pittsburgh Dispatch.’ In 1887, she left Pittsburgh for New York City. At New York, she got a job at John Pulitzer’s newspaper ‘New York World.’ One of her assignments was to investigate and report of the reports of brutality and neglect at the Women’s Lunatic Asylum on Blackwell’s Island. She pretended to be insane so that she could get into the asylum and ascertain the reports that they had received. She stayed in the asylum for ten days and then the newspaper insisted that she be released from the institution.

Nellie Bly received fame and popularity because of the book ‘Ten Days in a Mad House. She was also recognised as a civil rights activist. She was inducted as part of the team which was conducting the investigations. Changes were then made to the asylum after the release of the book. She continued her investigative work exposing improper treatment in New York jails and factories among other exposes. In 1888, she began her 24, 899-mile journey on November 14, 1889, aboard the Augusta Victoria with an aim to break the faux record of the character Phileas Fogg in the novel ‘Around the World in Eighty Days.’

Nellie Bly started her journey from New Jersey travelling by ship. She later travelled on vehicles. She went through England, France, Colombo, the Suez Canal, Hong Kong, Japan, Brindisi and the Straits Settlements of Penang and Singapore. She completed the trip in 72 days setting a world record. She gained international fame for her world tour. In 1890, she published a book about the experience she had titled ‘Around the World in 72 Days’. She later left the newspaper to become the President of her husband’s company ‘Iron Clad Manufacturing Co.' Later the company went bankrupt, and she went back to writing. She wrote about stories on Europe’s Eastern Front during World War I. She also wrote about the Woman Suffrage Parade of 1913.

In 1895, Nellie Bly tied the nuptial knot with Robert Seaman who was a millionaire manufacturer. In 1904 her husband died, and so she took over the reign of her husband’s company, Iron Clad Manufacturing Company. She invented a new milk can and a stacking garbage can, and she held the patents for both. She died on January 27, 1922, at St. Marks Hospital in New York City of pneumonia. She was interred at Woodlawn Cemetery in the Bronx, New York City.