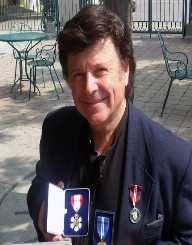 Canadian Rock and Roll singer and teen idol Robert Allen ‘Bobby’ Curtola was born on April 17, 1943, in Port Arthur, Ontario, Canada. He grew up in Port Arthur (presently Thunder Bay) and started singing in a choir from an early age. While studying in high school he used to work at his father’s gas station.

Bobby Curtola formed a pop group titled ‘Bobby and Bob Cats’ and performed at high school dances along with the group. During one such performance, the songwriter brother duo of Basil and Dyer Hurdon spotted Bobby and signed him to their label, Tartan Records. The Hurdon brothers wrote almost all of the hit songs of Curtola.

Bobby Curtola's first single ‘Hand in Hand with You’ was recorded at a local radio station and was released in January 1960. The song became a national hit in no time. In March 1960, he had the privilege of performing at the Bob Hope show in Winnipeg. In the fall of 1960, Curtola toured Western Canada in his first such musical sojourn. In 1961, he got the opportunity to work with noted country producer and recording engineer Bill Porter, recording for RCA studios in Nashville. He continued to record for RCA studios for many years.

Bobby Curtola, with his handsome boy looks, clean-cut image, and easy-going charm followed the success of his first single with many hits. In his soft-sweet voice of the silvery tenor, he went on to record some more hits such as ‘Indian Giver’, ‘Aladdin’, ‘Don’t You Sweetheart Me,’ ‘I’ll Never Be Alone Again’ and ‘Hitchhiker’ during the year 1961-62. In 1962, his chartbuster hit ‘Fortune Teller’ was released which sold a whopping 2.5 million copies internationally.

Bobby Curtola was invited to tour with Dick Clark and his group. Curtola met The Beatles and appeared on the acclaimed British T.V. variety show ‘Thank Your Lucky Stars’ while on tour in England in 1963. In 1964, he became the spokesperson for Coca-Cola. In June 1964, he recorded a jingle for Coca-Cola titled ‘Things Go Better with Cokes,’ which hit the market like a Top 40 single. He also co-wrote ‘The Real Thing,’ used for the commercial ‘Coke’s The Real Thing’.

Bobby Curtola dominated the Canadian singles chart between the years 1960 to 1967 and created an obsession for his music popularly referred to as ‘Curtolamania.’ He continued to produce waves amongst the music lovers with his singles and albums mostly written by the brother duo of Dyer and Basil Hurdon and released on the Tartan label in Canada.

A turning point in his career came in 1972 when Bobby Curtola became the highest paid entertainer in Canada. He entered into a five-year multi-million dollar contract with Las Vegas-based Walter Kane from the Hughes Hotel Chain to perform in Las Vegas. He went on to continue a very successful singing career in Las Vegas for the next 20 years.

Bobby Curtola's Christmas Flashback CD, which went gold was released in 1990. He produced 15 Great Hits CD on the RCA label in the same year and also recorded the modest Canadian Country hit single ‘Playin' in the Shadows of Glory’. He went on to record some more hits during the 1990s cashing on the nostalgia of the 60’s. Some of the most memorable of them are ‘Christmas Flashback’ (1992), ‘Gotta Get Used to Being Country’ (1993), ‘Turn the Radio Up’ (1997) and ‘Reflections: Legend to Legend’ (1997).

Bobby Curtola's association with The Princess Cruises started in 1990. For the next 12 years, he performed for the Cruises touring the Caribbean and the Mediterranean between 1990 and 1998, Malaysia and Indonesia in 2000, France, Italy, Switzerland, and England in 2001. In 1998, he compiled an anthology of his hits and released the album as an eight-CD boxed set. The compilation appeared to be somewhat pictorial documentation of his glittering career. He was a regular performer in cruises and casinos till death snatched him away from the world of music.

He was also conferred with CASBY Honours Award (1985) by radio station CFNY Toronto for his contribution to Canadian popular music.

He received the highest honour of Canada ‘The Order of Canada’ on May 7, 1998, for his pioneering contribution to Canadian Pop Music and his humanitarian effort within Canada.

Bobby Curtola married Karyn Rochford, an acclaimed oil painter, and sculptor. Unfortunately, on December 15, 2015, Karyn died in a car accident in Nova Scotia. Curtola moved to Edmonton, Alberta in early 2016 from Port Mouton, Nova Scotia where he was living with his wife. On June 4, 2016, Curtola died in his Edmonton home. He was 73 years old at the time of his death.

Bobby Curtola hosted many Telethons in Canada and the United States and put in his sincere assistance and effort to help raise money for different charitable organizations around the world. Some of his global contributions include philanthropic works in Indonesia, Bulgaria, the Jerry Lewis Telethon in the USA and the Bobby Curtola Foundation for Children in Ecuador.