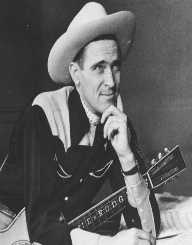 Ernest Tubb was born on February 9, 1914, in Crisp, Texas, USA. His parents were Sarah Aston and Calvin Tubb.

Ernest Tubb was a professional country music singer. He began writing his songs and performing them locally in the early 1940’s. However, it would be a couple more years until he would earn any kind of fame for his music. Once he did become famous, he earned the nickname, The Texas Troubadour. He was most famous for his country/honky-tonk style of music.

Tubb’s music professional music career began in the early 1940’s. Ernest Tubb became an official member of the Grand Ole Opry in 1943. Once he became a member of this prestigious country music group, he would end up returning to play there, even after he started making his own studio albums. He made appearances at the Grand Ole Opry on occasion all throughout his career, until the early 1980’s. He released his first album with Decca Records, Ernest Tubb Souvenir Album, in 1947.

Ernest Tubb continued to work with Decca Records all throughout the 1950’s. During this decade, Tubb released six studio albums. His most popular albums of the decade were Daddy of ‘Em All, The Importance of Being Ernest, and Favorites.

Ernest Tubb continued to work with Decca Records in the 1960’s, but he also began working with Vocalion Records as well. The 1960’s was his most productive year as a musical artist. He produced most of his albums in this decade. The first of Tubb’s albums to reach the top ten of the Country Music Chart (US) was Thanks a Lot, which was released in 1964 with Decca Records. The only other one of his records from this decade to get into the top ten on the charts was Another Story, which was released in 1967, also with Decca Records. Some of his other popular albums from this decade include By Request, Country Hits Old and New, Ernest Tubb Sings Hank William, and Saturday Satan Sunday Saint.

The 1970’s were Tubb’s last years of producing studio albums. He worked with Decca Records until 1972. In 1973, he began working with MCA Records. None of his albums from this decade charted in the top ten. However, his albums Say Something Nice to Sarah, and Ernest Tubb did chart in the top 50. His other studio albums from the 1970’s include Good Year for the Wine, One Sweet Hello, Baby It’s So Hard to Be Good, and  I’ve Got All the Heartaches I Can Handle.

All of Tubb’s awards are for his long and talented career in music.

Ernest Tubb was first married in 1934 to Louis Cook. However, this couple’s marriage ended in 1948. He remarried in 1949 to Olene Adams Carter. This couple remained married until Tubb’s death. All in all, Tubb had five children: Justin, Erlene, Karen, Violet, and Olene.

Ernest Tubb died on September 6, 1984, in Nashville, Tennessee, USA. He was 70 years old when he passed away.