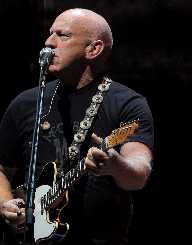 Bernie Leadon is a multi-instrumentalist and plays the banjo, mandolin, and varieties of guitars. He comes from a bluegrass music background and is well known for country rock music.

Bernard Mathew Leadon III was born in Minneapolis on 19 Jul 1947. His parents Dr. Bernard Leadon, Jr. and Ann Teresa Sweetser were devout Roman Catholics. The family enjoyed music. Bernie Leadon showed a keen interest in music from a very early age. His father was an Aerospace Engineer, and the family moved round the US.

Bernie Leadon was a teen when his family moved to San Diego. It was here that he first met Ed Douglas and Larry Murray of The Scottsville Squirrel Barkers. They were the local bluegrass group, and it was an excellent place for Bernie to develop his talents in California Country rock.

Bernie Leadon also met Chris Hillman, an 18-year-old banjo player with whom he shared a lifelong friendship. The Barkers had Kenny Wertz, a banjo player, and when he left in 1963, they invited Bernie to join the group. Bernie, however, had to leave when his family moved to Gainesville, Florida.

They recorded an album ‘Of horses, kids, and forgotten women.’ This was a local hit but did not make it on the national charts. The group was dismantled in 1968.

Later in 1968, Bernie Leadon joined the group, Dillard & Clark. Dillard was a bluegrass/banjo legend and Gene Clark, a songwriter. The group gained immense popularity and laid the groundwork for country rock. Country rock dominated the LA music scene for over a decade. The Classic “, The Fantastic Expedition of Dillard & Clark,” was an LP recorded by this group. It had Leadon’s warm vocals and multi-instrumental work.

Finally, Leadon joined ‘The Eagles.’ This band had guitarist Glenn Frey, drummer Don Henley, and former Poco bassist Randy Meisner. All were singers and Leadon joining them helped to shape the band. He brought with him his country, bluegrass, and acoustic sensibilities.

The Eagles received instant success with singles like Take it easy, Peaceful easy feeling and Witchy woman.Leadon’s talent on electric guitar, banjo, and vocals was highlighted. Bernie Leadon also contributed as a songwriter. Their country rock venture Desperado, however, did not do well.

They distanced from the country rock in their third album On the Border. The hits included Already gone, and My Man.My Man was penned by Leadon and a tribute to his friend and bandmate Gram Parsons who had died of drug overdose. The success of On the border was followed by One of these nights. Leadon quit the band in 1975 and was replaced by Joe Walsh. The Eagles released Hotel California another major hit.

Bernie Leadon created his solo album National Progression with his friend Mike Georgiades. With Chris Hillman and Al Perkins, he recorded an album of bluegrass and gospel favorites titled ‘Ever Call Ready’ in 1985. In 1998 he reunited with the Eagles in New York for induction into the Rock & Roll Hall of Fame. Take it Easy, and all current and former Eagle members performed hotel California.

Bernie Leadon released his second solo album Mirror in 2004. He appeared at the Grammy awards ceremony with Jackson Browne in 2016. He performed Take it Easy with the surviving Eagle members. This was a tribute to Glenn Frey who died a month earlier.  He now is a session musician and producer and lives in Nashville, Tennessee.