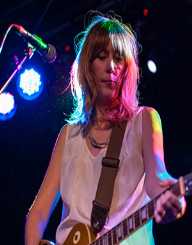 Beth Orton is an English singer known for her ‘folktronica’ style of music, a combination of folk and electronica.

Elizabeth Caroline Orton was born on December 14, 1970, in the English town of East Dereham. Her father was a public relations consultant. Her mother was a political activist and journalist. They split up when she was eleven. She moved to London when she was fourteen. By the time she was nineteen, both of her parents had passed away. To cope with the pain, she spent some time in Thailand living in a Buddhist community. She then returned to London and started working as a waitress. She also acted in a few plays.

Orton’s musical career began when she met producer William Orbit at a party. They soon began dating and working together. They went by the name The Spill and they became quite popular in Japan. They sang and wrote numerous tracks. Their best-known song was called “Water from a Vine Leaf”.

Soon, Orton and Orbit released their first album together called Superpinkymandy. It was only released in Japan. Around this time, Orton also borrowed her vocals to a few songs of the jazz band Red Snapper and to the electronic duo Chemical Brothers.

In 1996, Orton released her first solo album Trailer Park. The songs contained a unique mix of electronic beats and acoustic writing. This earned her two BRIT Awards nominations. Her album sold somewhat well, peaking at the sixty-eight spot on the music charts. Around this time she started touring. First, she was only supporting acts such as The Beautiful South. After that, she started performing on her own.

The next summer Orton toured with the traveling music festival Lilith Fair. She then released an EP called Best Bit. One of the songs was a collaboration with soul legend Terry Callier. Next, she released her second full album, Central Reservation. The songs had a more acoustic sound and explored more personal topics. She even talked about her mother’s death in “Pass in Time”. This album won her the Best Female Artist award at the BRIT Awards in 2000.

In 2002, Orton published the album Daybreaker. It contained collaborations with The Chemical Brothers, Four Tet, Emmylou Harris, and Ryan Adams. This album was her biggest commercial success. It reached the eight spot of British album charts, and the fortieth spot on the Billboard 200 in the United States. In 2003, she released a double album called Pass in Time. It was a collection of old unreleased songs.

Orton’s fourth album came out in 2006. It was named Comfort of Strangers. The sound was far from her usual electronic influences. Instead, it had a traditional folk form. Six years later, the album Sugaring Season was released as a follow-up to Comfort of Strangers. It was almost purely acoustic, with most of the songs being recorded live. Both of these albums received positive reviews from different critics and music magazines.

Orton’s most recent album, Kidsticks, was released in 2016. Opposite of the previous two albums, this one consisted of an almost purely electronic sound. She received praise from critics for boldly exploring different musical styles.

Beth Orton is married to American folk singer Sam Amidon. She has a daughter named Nancy, born in 2006, and a son named Arthur, born in 2011.