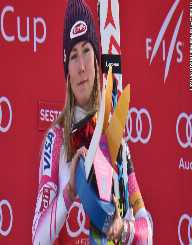 American slalom skier Mikaela Shiffrin was born on March 13, 1995, in Vail, Colorado. She is the second child of Eileen and Jeff Shiffrin, both former ski racers. She learned how to ski at an early age - only when she was two years old. When her family moved to New Hampshire, Shiffrin started to improve her skills with coaches Rick Colt and Kirk Dwyer.

Mikaela Shiffrin started to rise in high racing ranks as soon as she was allowed to compete in International Ski Federation sanctioned races. She competed in her first competition when reaching the required age of 15. She won the Nor-Am Cup in 2010, only in her 8th FIS level race. By comparison, it took Linsey Vonn - the most excellent female skier in the history 44 runs to win the podium. She caught the attention of international ski community the same year when she won the Trofeo Topolino race- one of the most prestigious ski events in Italy. Same year Shiffrin also got the bronze medal at the Junior World Championships in Cans-Montana, Switzerland.

In the 2011-12 season, Mikaela Shiffrin started to tour Europe and compete for the World Cup. In this season she won the bronze medal in slalom. That year she also won three more World Championship events and a gold medal in 2013 World Championships.

In 2014, Shiffrin competed in Sochi Winter Olympics. At the time, she was already the youngest slalom world champion in history. She won the first run, but nearly crashed in the second. Shiffrin was able to recover and took the gold medal. She is the youngest winner in Olympic history for her category. She was also the first American athlete to win the gold medal in 42 years.

One of the most significant achievements in her career so far has been winning the gold medal in 2014 Sochi Olympic games in Russia. Mikaela Shiffrin won the gold in slalom, and also reached 5th place in giant slalom.

Shiffrin has been majorly victorious in World Cup series since her first debut at 15 years of age. In 2016 season, she won all five slalom races she participated. The same year she also won the World record for most significant win margin in slalom for women – 3.07 seconds. Her first giant slalom won was in 2015 World Cup series.

During the off-season, Mikaela Shiffrin resides in Eagle-Veil, Colorado. She was interviewed by David Letterman on the Late Show in 2013. In 2014, she was also on the NBC special “How to Raise an Olympian.” Shiffrin’s mother travels with her to all her races. She is currently single. Shiffrin is dedicated to her career and doesn’t drink or party.