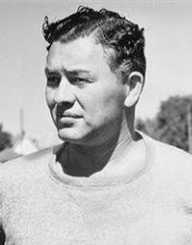 Curly Lambeau graduated from Green Bay East High School. He then enrolled at the University of Notre Dame. After falling ill with appendicitis, he left without obtaining a degree.

Curly Lambeau returned home to Green Bay in 1919 and worked for the Indian Packing Company, a meat-packing plant. The same year, he organized a local football team with George Calhoun, the sports editor of a local newspaper.

Curly Lambeau convinced the Acme Packing Company to pay $50.00 to purchase the Packers a franchise in the American Professional Football Association.

For various reasons, the team was forfeited. Curly Lambeau repurchased it by paying a $250 franchise fee, using $50.00 from his pocket (1922). A group of local businesses then purchased stock, and the Packers became a nonprofit organization, the Green Bay Football Corporation (1923). Lambeau was a standout player (1919-1929) and is credited with pioneering the forward pass in professional football.

His record as a head coach stands at 209-104-21, with a playoff record of 3-2. Six players coached by Lambeau went on to be listed in the Pro Football Hall of Fame.

Curly Lambeau bought Rockwood Lodge in 1945 and developed a training facility. The Packers’ board of directors did not approve of the purchase and were also unhappy with the plan to take over the organization and turn it into a for-profit company. It was mainly because of this that Lambeau resigned in late January 1950.

Curly Lambeau was inducted into the Pro Football Hall of Fame in 1963. After his death, the Packers stadium was renamed Lambeau Field in Green Bay. Outside the main plaza at Lambeau Field Atrium, there is a bronze statue of Lambeau.