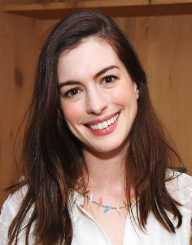 Anne Jacqueline Hathaway was born on November 12, 1982, in Brooklyn, New York. Her father is a lawyer, and her mother was a former actress. Her mother Kathleen inspired Hathaway to become an actress. Interestingly, she played Fantine in the first U.S. production of Les Miserables, a role that her daughter later performed on the big screen. When Hathaway was six years old, her family moved to New Jersey. She has an older and a younger brother. She was raised as a Roman Catholic, and at one point wanted to become a nun. Her relationship with the church changed, when she found out that one of her brothers is gay.

Hathaway was schooled at the Brooklyn Heights Montessori School and later attended Wyoming Elementary School in Millburn. She then went on to study at Millburn High School. In high school, Hathaway began to perform in school plays. She won the Paper Mill Playhouse Rising Star Award for Best Performance by High School Actress. After high school, Hathaway spent studying at Vassar College in New York, majoring in English and Women’s Studies. She has also studied at the American Academy of Dramatic Arts and The Barrow Group Theater Company. In 1998, Hathaway sang soprano with the All-Eastern U.S. High School Honors Chorus at Carnegie Hall.

Hathaway’s first appearance on TV was in the Fox series Get Real. Her big screen debut was in The Princess Diaries. The film became her breakthrough and in 2001, Hathaway was cast in the movie The Other Side of Heaven. The Princess Diaries was a major commercial success and earned Hathaway excellent reviews. Hathaway made her stage debut in the City Center Encores! Production Carnival!, receiving positive reviews. For the following three years, Hathaway mostly appeared in family-oriented films and was known as a children’s role model. In 2003, Hathaway declined the role of The Phantom of the Opera, since the production overlapped with The Princess Diaries 2.

In 2005, Hathaway began her transition into more mature roles. She starred in the Barbara Kopple’s drama Havoc, which also included nude scenes. The film was not released in U.S. theaters. Her next role was in the 2005 drama Brokeback Mountain. The film received excellent reviews and several Academy Award nominations. In 2006 Hathaway finally got to work with her idol Meryl Streep in the comedy The Devil Wears Prada.

In 2007, Hathaway was cast for the role in Knocked Up but backed out at the last moment. She didn’t want to allow to use real footage of a woman giving birth to create illusion she is doing it. Her next project was the 2008 movie Becoming Jane, which told the story of English writer Jane Austen. The same year, Hathaway joined beauty company Lancome as the face of the fragrance Magnifique. The following year she starred in the film adaptation of Mel Brooks’ TV series Get Smart.

In 2009, Hathaway starred in the film Passengers and Rachel Getting Married. The latter earned Hathaway critical acclaim from Venice and Toronto film festivals. For her performance, she was nominated for Golden Globe and Academy Award. The same year she also voiced several episodes of The Simpsons, which earned her an Emmy Award for outstanding voice-over performance. In 2010, Hathaway starred as the White Queen in Tim Burton’s Alice’s Adventures in Wonderland.

Hathaway continued her success as a voice-over actress in 2011 film Rio. The movie was a commercial success and earned $484 million in box office revenues worldwide. She continued her box office success by starring in the 2012 film The Dark Knight Rises as the cat burglar Selina Kyle. She had to train in martial arts for the role, which was also physically demanding.

In 2012, Hathaway starred as Fantine in the film adaptation of Les Miserables. Her long hair had to be cut off on camera, and she had to lose a lot of weight. Her hard work paid off since Hathaway won more than thirty accolades, including Golden Globe and Academy Award for Best Supporting Actress. She has also starred in several box office hits, including Interstellar (2014), The Intern (2016) and Alice Through the Looking Glass.

In 2004, Hathaway was dating Italian real estate developer Raffaello Follieri. She participated in the development of Follieri Foundation. In 2008, the foundation was investigated by the IRS. This brought on several legal issues, and Hathaway ended the relationship. Later that year, Follieri was arrested on charges of defrauding investors out of millions of dollars. FBI confiscated Hathaway’s private journals as a part of the investigation.

After the troubles with Follieri, Hathaway began dating Adam Shulman. The couple got engaged in 2011 and married the following year. In 2015, it was announced that they are expecting their first child. Jonathan Rosebanks Schulman was born in 2016.