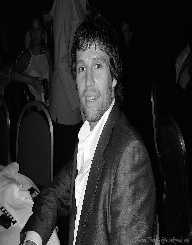 Jason Orange is very talented, in that he sings, dances, and acts.

In the 1980’s,Jason Orange was in breakdance group called Street Machine. In 1985, they won the Manchester round of the UK Breakdancing Championship. Jason Orange appeared on The Hit Man and Her as one of the featured dancers later in that same decade.

His big break came when he joined the boy band, Take That, in November 1990. He remained with the band until they split in 1996.

After the demise of the band, Jason Orange moved into acting. He won a role in Killer Net which was on television in 1998, and then was cast in the stage production of Gob in 1999, playing in London.

Take That reformed in 2005, and Jason Orange once again became part of the group. Their first album was released in 2006, called, Beautiful World. This was followed with two more album releases, The Circus in 2008, and Progress in 2010. Jason Orange contributed to the song writing on the albums.

In 2014, Jason Orange announced he was leaving the band and would no longer be writing music. He kept a low profile, staying out of the public limelight.

It was rumored in 2011 that Orange was dating Catherine Tate, a comedienne and actress.