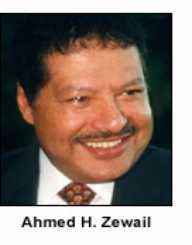 Ahmed H. Zewail who won the 1999 Nobel Prize for Chemistry was born on the 26 February 1946 in Damanhur, Egypt. His father was a motorcycle and bicycle fitter who later worked for the government.

Initially, Ahmed H. Zewail did postdoctoral research under Charles Bonner Harris at the University of California in Berkley. He was then offered a position at the California Institute of Technology (1976) where he became the inaugural Linus Pauling Chair in Chemical Physics. He held the chair until the time of his death in 2016.

During the 1980s, Zewali and his team developed methods for studying chemical reactions in detail. They proved that using laser technology to produce flashes of light in femtoseconds long reactions can be mapped. Zewail was a director of the Physical Biology Center for Ultrafast Science and Technology, at the California Institute of Technology. He was also a member of President Barack Obama’s Presidential Council of Advisors on Science and Technology.

Ahmed H. Zewail received the 1999 Nobel Prize in Chemistry for his studies of the transition states of chemical reactions using femtosecond spectroscopy. Other awards Zewail won include the King Faisal International Prize from Saudi Arabia (1989), the Order of the Nile (1999), the Tolman Prize (1997), the Albert Einstein World Aware of Science (2006), the Othmer Gold Medal (2009), the Priestly Medal (2011) and the Davy Medal (2011). He was also elected a fellow of the Royal Society in 2001.