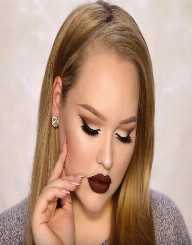 De Jager began her rise to stardom completely by accident back in 2008. She was sick and stayed at home, where she began watching the famous television show The Hills. She was smitten by how the stars Lauren Conrad and Heidi Montag looked and began searching for tutorials on how to do makeup like these stars. She discovered that there is a lack of make-up tutorials on the website and got the idea of making some.

After her discovery, De Jager began researching the topic, and soon after uploaded her first video tutorial on YouTube. De Jager was only 14 years old at the time. Although her first video did not gain so much popularity, she enjoyed doing it and began to post more and more videos. Soon enough her YouTube channel NikkieTutorials became the most popular beauty channel in the Netherlands.

After gaining widespread recognition, De Jager continued to improve her skills and went to study with Pascale Tesser in the B Academy in Amsterdam. She attended his course and learned about professional makeup in shows and photo shoots. In 2011, she began working for Tesser’s company Colourfool Agency.

At the Colourfool Agency, De Jager got to work on several major projects, such as Hollands & Benelux’s Next Top Model and Miljonenjacht& The Face. She also began to write a monthly column for teens in the magazine Fashionista. She left the agency in 2014 and began working as a freelance make-up artist.

Nikkie De Jager was born on March 2, 1994, in Wageningen, the Netherlands. Her mother is a professional beautician and has her online shop. De Jager is currently dating Rick Smith.

Although she is the ultimate make-up tutorial star, De Jager does not like to wear make-up. She also started out an experiment, where she would do the only half face of make-up, showing the shocking difference. After this, many other girls began to post pictures of themselves with and without make-up.