On the outside, Pisces rising is usually very quiet and often shy. But there is a whole other story happening beneath the surface. Pisces ascendant sign aren’t always on this planet. They often live in their own fantasy world, floating aimlessly through the air.

This star sign is detached, to say the least. If Pisces rising doesn’t necessarily like something, no worries, they just opt to think different thoughts, drifting off to their own personal la-la land, in which all is perfect. Dream of rainbows and butterflies for a more dramatic image. That being said, Pisces ascendants are not the ones to be counted on for an objective perspective. Theirs, in fact, is anything but that.

The ascendant in Pisces‘ lack of realism often leaves them restless. Immersed in their thoughts, they are often filled with new ideas and whims and eager to try them out. One day they might decide they want to be an astronaut, the next, married with children.

One day they view the glass as half full, the next half empty. Their daydreams are abounding and they change often. Expect different personalities depending on the day and the dream. 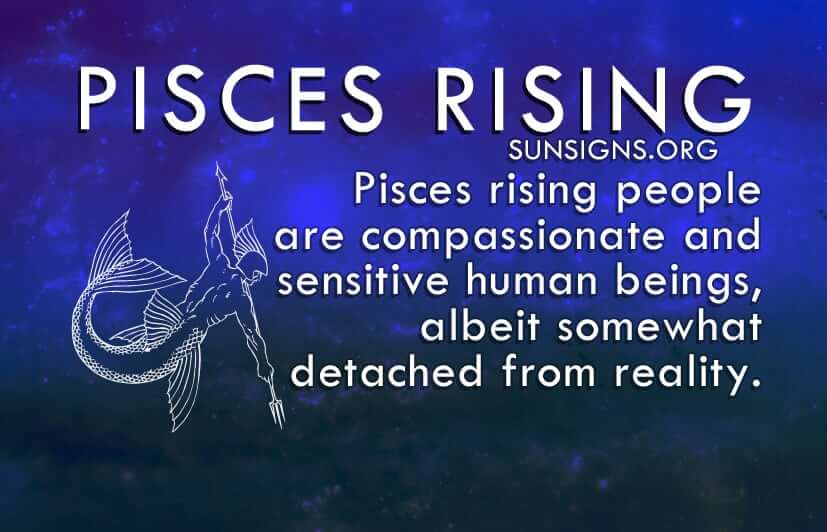 Naturally, these dreamers are idealists, too. The Pisces rising sign want to see the good in everyone; yet, it is sadly to their disadvantage at times. Being so trusting in the altruism of others is a nice thought, but it often leaves the Pisceans hurt. The rest of the world tends to exploit their good nature, which in turn pains them greatly.

The Pisces ascendant sign often suffer from depression or addiction problems due to these issues. Nor do they stand up for themselves either, which only furthers the problem. The majority of the time Pisces rising ends up feeling like a victim, helpless in a cruel world, misplaced and left out, never fully belonging.

Yet they really want to believe in an ideal world, as well – one free from sadness, hardships and pain. Although when they encounter these circumstances, they quickly retreat back to their fantasy world, unable to deal and not wanting to deal with it either. The Pisces in astrology are extremely sensitive to the world around them and the emotions of others.


This is the most empathetic of all the rising signs in the zodiac. A Pisces rising will truly feel all your joy and all your sadness and be right there by your side. They will not be faking anything either. They are true to their word and emotions.

The Pisces rising people are one of the most beautiful in the zodiac. They have the perfect slim body with magnetic facial features and glowing skin. They have artistic fingers and dreamy eyes that charm everyone. Their overall personality is soft and sensitive.

In love, Pisces rising is the hopeless romantic. Like the rest of their lives, love is very much a fantasy. They are constantly looking for the eternal god or goddess of their dreams.

They have a tendency to put their lovers on a pedestal that isn’t always deserved. Once again, they end up disappointed that their lovers don’t always live up to their imagined expectations.

Yet with this idealism comes the desire for perfection. The Pisces rising sign expect that life flows perfectly and smoothly. But as we all know, that is never the case. Once again, this is something else that upsets them and has them opt for their imaginary safe place.

The irony in this is that usually Pisces rising are rather disorganized in their personal lives, leaving much clutter and constantly losing important belongings. Most likely this has to do with the fact that they end up living too much in their fantasy world.

Nonetheless, in Pisces rising you will find a compassionate and sensitive human being, albeit somewhat detached from reality.