Sheep and Pig in Love: Bound to be a Family

The Sheep and Pig compatibility is generally good. When the Goat is dating the Pig they make a good match for friendships or love interests. The giving nature of the Pig, with a little patience, can provide the Sheep with everything their heart may desire.

The Pig is an industrious and idealistic Chinese animal sign that follows its passions wherever they lead. Pigs may be activists, but they may also be a bit lower key. As long as they believe in what they are doing, quiet devotion is often enough.

The Sheep is an innately curious and creative person who is capable of finding esoteric ways of circumventing problems. A Goat’s thoughts tend to resemble a tangle of yarn, rather than anything even close to a straight line.

According to the Sheep and Pig Chinese compatibility lovers here would be more engrossed in family life. They would want to settle down together. Why? Because they complement each other. The romantic nature of the Sheep will amaze the Pig’s honesty. Therefore, they would want to commit themselves to this relationship. 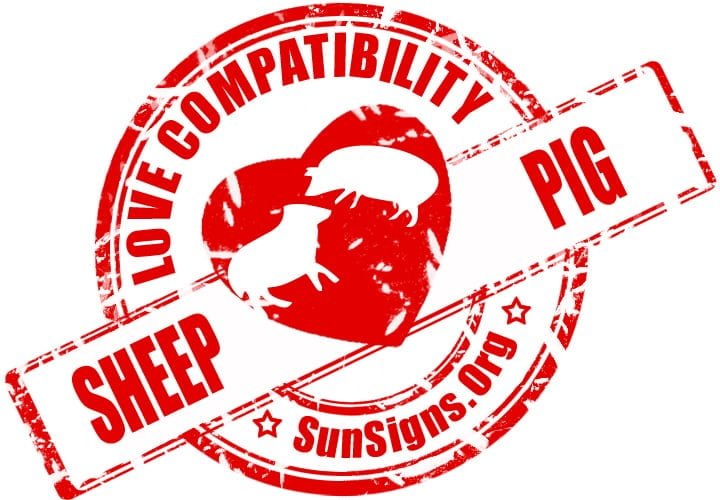 The Pig man Sheep woman or Pig woman Sheep man relationship can make for an excellent pairing. In this instance, one should always keep in mind that these two work best when taking things slow and easy.

Getting lost in the sensuality of the everyday and mundane, the Pig and Sheep in love may soon forget the difference between a good conversation and a sexual encounter. Communication is key to the success of the Sheep Pig Chinese compatibility.

Moreover, sexually, the Goat and Pig make excellent partners in bed. The Pig-Sheep marriage too will be successful for a lifetime. It should also be noted that lovers here are ready to settle down. They find the qualities they are after in each other. Consequently, Sheep Pig married couple could compromise for their union to work.

Pigs are also sensual creatures that revel in the simple pleasures of life’s finer things; whether those things are a particularly comfortable piece of furniture, a delicious meal, or the company of good friends.

The Chinese Sheep is the very stereotype of the creative personality. This astrology sign has immense difficulty remaining organized or on any kind of linear track. This is not, in and of itself, a bad thing.

The relationship between the Sheep and Pig soulmates is likely to be affected by the energy and mood of the Sheep.

The male and female Pig is more than willing to make others happy. Indeed, they gain a significant amount of personal satisfaction from doing so. However, the Sheep must remember to tell them what they want.

This should not, in most cases, be a problem. However, the male or female Goat are often very aware of what it is that they want and need. They are more than willing to tell others precisely that. In fact, they may be so adamant and incessant about what they want that they come across as needy or nagging.

Generally, the Sheep needs to calm down a little. Though telling them this outright is often not a solution. They are quite temperamental. So, the Pig needs to handle them with absolute care. In other words, they should be understanding of each other.

In return, the Goat provides a bit of energy and excitement to the sedentary Pig. Also, they are more than willing to reciprocate any affections directed toward them and are equally at home in the lap of luxury as any Pig.

In a business relationship, the Pig is likely to provide the bulk of any groundwork and productive labor in this duo, while the Sheep provides creative direction and motivation. Additionally, the Pig will want to coordinate everything in business. They are great planners. Consequently, the Sheep should allow the Pig to run things around. But this should not be a reason for the Pig to boast. The Sheep is quite emotional. Hence, they do need to be pampered, even in business.

It should be noted that the Pig man or Pig woman may be the better of the two when it comes to handling finances. They are industrious, but their passionate nature will never allow them to be truly happy unless working toward something in which they believe wholeheartedly. 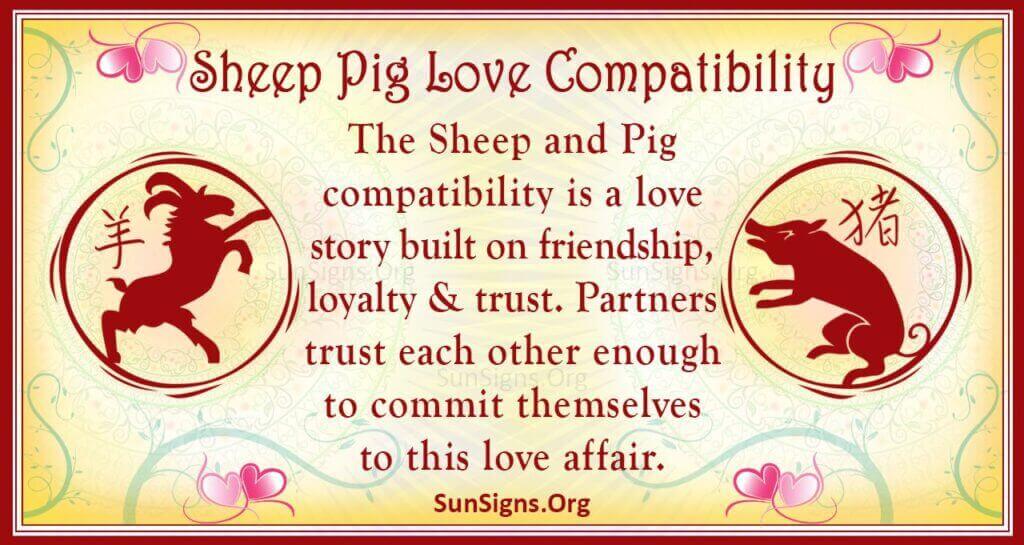 The Sheep man or Goat woman tends to have little patience for such minutiae. They can, and do, possess the ability to find just such pursuits, however esoteric, and convince the Pig of its worthiness.

Great financial success may never be a viable dream with these two, but either one individually, and both together, tends to feel that just doing what they love and bringing happiness to others is reward enough. The breakup of this zodiac match is rare.

The Sheep is mild in all situations. Additionally, they are always ready to lend out a helping hand. This is something that will interest the Pig. Therefore, their friendship will last long. These are individuals who can become friends before becoming lovers if the friendship involves a Sheep man Pig woman.

Are Sheep and Pig Compatible?

Admittedly, the odds are in favor of the Sheep Pig Chinese zodiac compatibility. Partners here have all it takes for their match to work. Whether in business or in marriage life, the Sheep Pig union could be the talk of the town. If both can work on their emotions and deal with them amicably, then nothing should prevent this match from working.

In conclusion, the Sheep and Pig compatibility is a love story built on friendship, loyalty, and trust. Partners trust each other enough to commit themselves to this love affair.