Horse and Monkey compatibility describes a relationship where both partners are charming and cheerful in every aspect of life. In other words, they have great personalities toward each other because they see the beauty of being together in a relationship.

Are Horse and Monkey compatible? Character-wise, they are all good for each other in terms of support. Perhaps, they value each other because they believe in the power of togetherness. It can be challenging to find such bonding, but it is one of a kind.

Similar personality traits can generally work towards helping a couple be more compatible. However, there are several times when being too alike can be a bad thing. A Horse and Monkey relationship seems to be one of the latter.

When the Horse is dating the Monkey, it might seem like fun initially, and odds are, they will burn out quickly. But some can make it even with the odds against them. Is there any hope for a romance between a Horse and Monkey love? 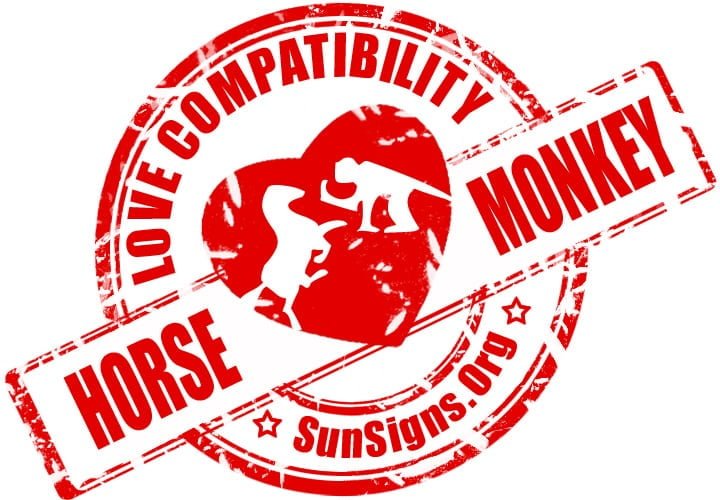 Two Horses can make a relationship work because they understand each person’s urges and desires. However, the trouble with Horses and Monkeys is that they have a lot of similarities and none of understanding.

Being too much alike leads to the Horsewoman and Monkey man couple not being able to get along well for a long time. Both of them tend to be cheerful and spirited. They both look for stimulation, and both love being everybody else’s focal point.

Unfortunately, seeking everyone else’s attention can bring out the aggression in a Horse Monkey friendship. A Monkey won’t back down from a confrontation with a Horse to prove who belongs in the spotlight. However, Horses are known for their impatience when it comes to business.

They likely won’t bother and will simply up and leave without warning. An action like this can shock the Monkey, who would merely be gearing up for a fight. Their personality has the potential to push the restless Horse to break up this love match else sooner rather than later.

If Horse man Monkey woman marriage compatibility doesn’t burn out over a spotlight war, it could be an energetic, entertaining happening. However, if it isn’t the spotlight, it will be something else that will likely push these two apart.

Horses hit the ground running in new relationships. They love the act of falling in love and wooing a new partner. They’re likely to show their fickle side at some point; when they lose interest, they don’t see a point in trying to push through and work things out.

Honestly, the Monkey man is usually okay with this and doesn’t lose any sleep over a Horse man’s departure. Though they may stray into a romantic relationship with a Horse, they might not have time to wander before their love is gone.

The Horse man and Horse woman are very nomadic, active individuals. They have a tough time settling down. Their minds change on a whim, shown in how they jump from job to job, project to project, or relationship to relationship. They are intense in love, at least in the beginning. They know how to seduce a partner and are masters at it.

Ultimately, they struggle with trying to find a feeling of inner peace so that they can quell their wanderlust. If they can achieve that, however, they find stability. Stability brings appreciation for what they have at home, and they no longer feel a need to search out the greener grass on the other side. 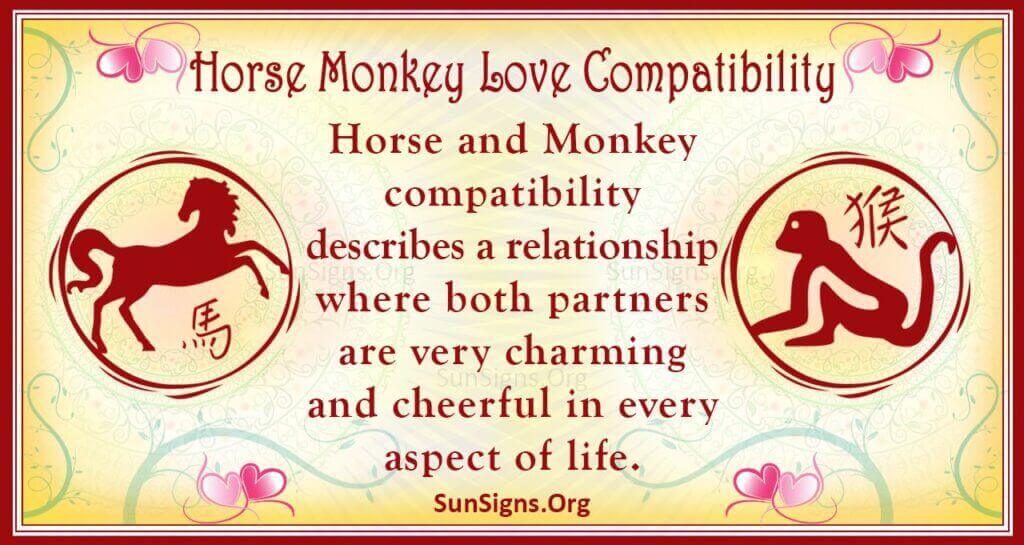 Those born under the Chinese astrology sign of the Monkey tend to be alluring and lively. They love fun and need lots of action and titillation. They are very positive and have an array of attractive traits, including a spirited sense of humor and being quite clever. Though it may seem out of character, they are very admirable listeners.

The Monkey male and female have an innate interest in learning as much as possible in a wide field of topics. They are also a little selfish. They are interested first and foremost in chasing their gratifications. Their lighthearted arrogance can lead to issues in all areas of their lives, including romantic ones.

While the Monkey man or Monkey woman can be an entertaining, thrilling partner, there always exists the possibility that they will go astray. Monkeys can certainly land themselves in hot water. Their trademark flip tone and clever banter can sometimes get them to a spot of forgiveness with those they manage to offend.

Like Horses, they know how to have a fun time. Both tend to jump from one set of friends to another, though their motivation for doing so is vastly different. Horses switch groups because of wanderlust and a need for acceptance, and feeling inferior to other peers.

Monkeys switch it up because they genuinely enjoy the different people that make up those groups. They tend to build another group entirely from those that inhabit the others groups, which makes for an original assortment of friends to call their own.

Horse and Monkey compatibility traits don’t necessarily mesh very well; their relationship takes a lot of work. On the contrary, in bed, the Horse and Monkey are sexually most compatible. If they want to make this Chinese zodiac love match work, they will have to learn to be less self-absorbed as individuals and work more towards being a couple and working together. Equally, a working couple will have a good and enjoyable life because she can see greatness within them.