How To Use Lucky Bamboo For Good Feng Shui

Growing up as a Chinese kid, I remembered seeing bamboo plants in most of my extended relatives’ homes as part of the décor. I had always figured that it was something to with the fact that the Chinese had a long history with the use of bamboo.

The Chinese used bamboo for almost everything: housing, clothing, furniture and transportation construction materials, musical and writing instruments, and even food (I love bamboo shoots, although my Western friends/family look at me weird when I mention it!).

To many, the bamboo plant also symbolizes luck, prosperity, and longevity (to which I think, this is the reason mostly why most of my relatives had decorative bamboo plants in their homes).

Little did I know at the time, that bamboo plays a role in Feng Shui. What is Feng Shui? The direct translation of this word means “wind water.” To my understanding, it has something to do with the positioning/placement of items in one’s living environment which affects the flow of positive and negative energy or what is also known as Qi.

Feng shui is also not just limited to house-hold item placements and décor but also used in deciding the location of a building, architectural design and the colors used.

Based on these factors and application, many believe that with good Feng Shui, it promotes good fortune, health, luck, relationships, and wealth, whereas bad Feng Shui brings misfortune and unhappiness.

Feng Shui also incorporates the five Chinese elements of water, fire, earth, wood, and metal – and also certain directions in your home represents different aspects of your life. As you can see, Feng Shui is a simple yet complex practice that is hard to summarize in just a few sentences.

How does this tie in with bamboo? As aforementioned, bamboo is the symbol of luck, prosperity, and longevity. The most popular bamboo plant used in homes for Feng Shui is the Lucky Bamboo (Dracaena Braunii or Dracaena Sanderiana), also known as the Chinese water bamboo.

From my research, even though the name has ‘bamboo,’ it is by no means a true member of the bamboo family and believe it or not, it’s not native to China, but to Cameroon in West Africa.

Normal bamboos are known to proliferate, some species considered to be one of the fastest-growing plants in the world. Lucky Bamboo, on the other hand, does not and its pleasing bamboo-esque aesthetics has made it a popular Feng Shui home plant.

For usage in Feng Shui, the Lucky Bamboo has to represent the previously mentioned five elements:

As with most plants, it requires water to survive. So, this covers the water element.

Most of the Lucky Bamboo I have seen comes with a red ribbon, or a red-colored element (like a sticker on the pot/vase). The color red represents fire.

Pebbles, soil, rocks, etc., are used to grow and represent this element. You might have noticed that pebbles are a popular choice as it is aesthetically pleasing.

Some plants come with a Chinese coin on the ribbon to represent this element. If not, most of the plants come in either glass or ceramic pots.

The Lucky Bamboo itself represents this element. Also, the placement or location of the Lucky Bamboo in your home is important. Other Feng Shui guides will illustrate spots or sections in your home/office representing different aspects of your life – wealth, reputation, relationships, family & health, spiritual health, children & creativity, knowledge, career, and travel.

Once you have figured out these Feng Shui zones in your home, the next is to determine where you should place your bamboo.

For those believing in Feng Shui, the placement is crucial, and if placed correctly, it helps attract positive energy to the life aspect you wish to improve. The two most famous and recommended zones in the homes are:

There is an even more in-depth guide as to figuring out your kua number to figure out exactly where your personal lucky or unlucky Fengshui position is, calculated on your birth year and gender if you want to pinpoint exact locations.

However, just because most guides recommend specific zones, it does not mean you cannot place your Lucky Bamboo in other life aspect zones in your home. I would assume you would put it in the area associated with the life aspect you wish to improve!

Naturally, just the single stalk of the Lucky Bamboo. Signifies personal growth, or some say it represents a healthy life filled with prosperity. From what I have read, it is also a favorite business gift to give to companies as a symbol of prosperity.

Mostly everyone’s heard of the Chinese word of Double Happiness and generally associated with love or a happy relationship. This is again true when it comes to the number two, representing love or also said to double your luck.

This seems to be an everyday favorite, with the three stalks, each representing happiness, longevity, and prosperity.

Anyone who knows the Chinese belief associated with the number four is bad or unlucky. The word itself sounds almost, if not very similar to the word ‘death.’ Therefore four stalks are thought to bring negative energy instead, and as a gift, it could be considered extremely rude as it could be interpreted that you wish negativity (death wish) upon the recipient.

However, other sites mention that four stalks represent academic/education achievement. As a whole, when in doubt, I would avoid this number if you are planning to give this as a gift.

Thought to represent luck and draw prosperity as six in Chinese almost sounds like it.

If health is an aspect that you want to focus on, lucky number seven is for you!

Ah, the auspicious number eight! The Chinese love this number as it almost sounds like the word for fortune growth, success, or prosperity. This is also thought to promote fertility.

To give or to receive ten stalks, means to wish someone fulfillment, completion or satisfaction. Pretty much means hoping that you’ll get everything you desire in this life.

Then, for some reason, it just jumps to the number twenty-one, and that’s a lot of stalks! Thought to represent great overall blessings, and to wish great wealth and health.

Last but not least, taking care of your Lucky Bamboo is not a very hard chore but an important one if you want it to thrive. Take a pot or vase of your choice but ensuring that it is at least 2” wider than the plant, and using the Feng above Shui Earth elements to keep the plant upright. 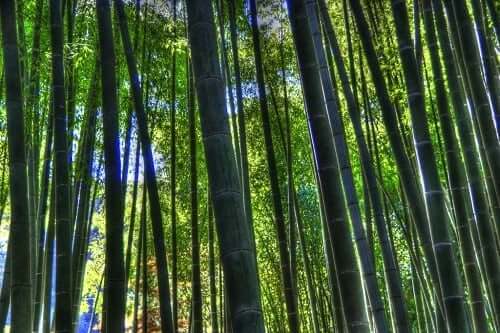 When watering your Lucky Bamboo, preferably use filtered/distilled water as tap water might contain fluoride or other chemicals that might affect the vitality of your plant.

If using soil, ensure that it is kept moderately moist (not too wet nor too dry) and will need to be misted every two days. This plant also doesn’t need much fertilizer, and over-fertilization could lead to yellow leaves. Should any leaves turn yellow, trim it as soon as possible.

Also, if you’re planting your plant with just pebbles and water, remember to change the water every two weeks, and ensure that the water levels are kept at an approximate 1” from the base of the canes and that the roots are completely submerged.

Lucky Bamboo is an indoor plant, so never place it in direct sunlight, though it still will need to receive an ample amount of indirect light.

It will grow well in moderate indoor household temperatures. Also, try and avoid placing the plant near vents or a door as sudden temperature changes can cause problems.