Dragon and Tiger compatibility shows how your relationship is going to be because you are going to face some tough times around the year. In other words, you should not part ways because of the circumstance you are facing and support each other. More so, your relationship should not only be determined by the comfort you have but also the hard times you are facing together. On the other hand, it is great to get married to someone who will understand your challenges.

The Chinese zodiac dragon and tiger relationship will be good together. This couple will complement each other in all aspects and enjoy great love compatibility. Seemingly, when you understand the problem one is facing signifies that you know each other better. Mostly it is not easy to gain the trust of someone but once you do the right thing you will become great.

The dragon will find the tiger challenging and hard to control. They are always prepared for a challenge. Tigers are brave and confident. They are spontaneous and fickle and will definitely be difficult to handle. A dragon can be somewhat spontaneous, but they admire the tiger. 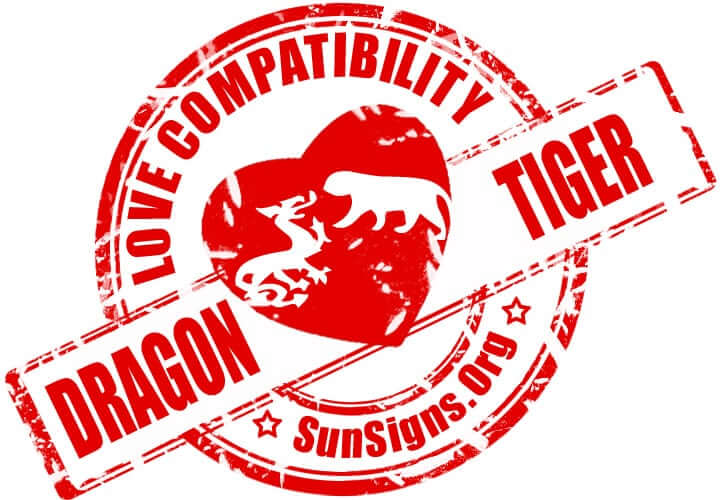 The dragon and tiger soulmates might be intensely attracted to each other when they are dating. Both have personalities that can draw other people in. However, they not be attracted to each other for long. They might have problems if they are not careful because they both want to be in charge. In other words, they have to understand each other more and every one the love they deserve. More so, they should not fight for positions, but they should focus on building their relationship.

The Chinese zodiac dragon-tiger compatibility will be very volatile in an emotional relationship. Both can more than lovers to each other’s high energy. The dragon is smart and brave. However, they require emotional Motivation from their partner. The tiger will mostly require freedom and can be very sensitive. They have a lot of kindness and respect. Because of these traits, the dragon and tiger friendship will be exciting and interesting.

The dragon man and tiger woman couple are known for being brave and motivated. Both will want to control each other. The dragon will be willing to compromise if their partner is ready to do. They will both want to make the relationship successful. However, that feeling might not last. They will both have to compromise to make their math last. Also, it shows the confidence they have because everyone is good in the role they play.

The dragon and tiger marriage will not be boring and regular. Both are lively and open-minded. Both will find each other exciting. However, both will require their independence to be happy. But the dragon and tiger in bed make excellent sexual partners. Basically, they understand how to satisfy each other. Actually, they have lasting feelings for each other.

Tiger in the Year of the Dragon

The male tiger has a lot of admiration for its partner. However, they are not likely to back down. If they get pushed down into giving in, they will likely have an argument. Both the dragon and the tiger have short tempers. They will dislike being controlled by their partner. They will need to understand each other’s need for independence.

Chinese astrology compatibility predicts that both will need to help keep the relationship balanced. Both will be able to have a daring relationship. The dragon and tiger will need to have different groups of friends and take some time alone. They can be successful in a romantic relationship or in business together. Perhaps, every business they do together becomes successful. That means their relationship and togetherness do matter a lot because they can achieve what they are looking for as a group.

Dragon in the Year of the Tiger

The dragon-man or woman likes to control everything they can, including people and situations. At the same time, the tiger man or woman is controlling in her own way. They both are passionate when arguing. They might see a lot of disagreements in their relationship. The goodness is that any disagreements they find themselves in will never last because they can sort it out.

A dragon husband and tiger wife will be immediately attracted to each other. The male dragon and the female tiger will be impulsive, which might cause arguments. However, this might help their relationship. Both these Chinese astrology signs enjoy a good argument. A dragon wife and tiger husband will be very good together. 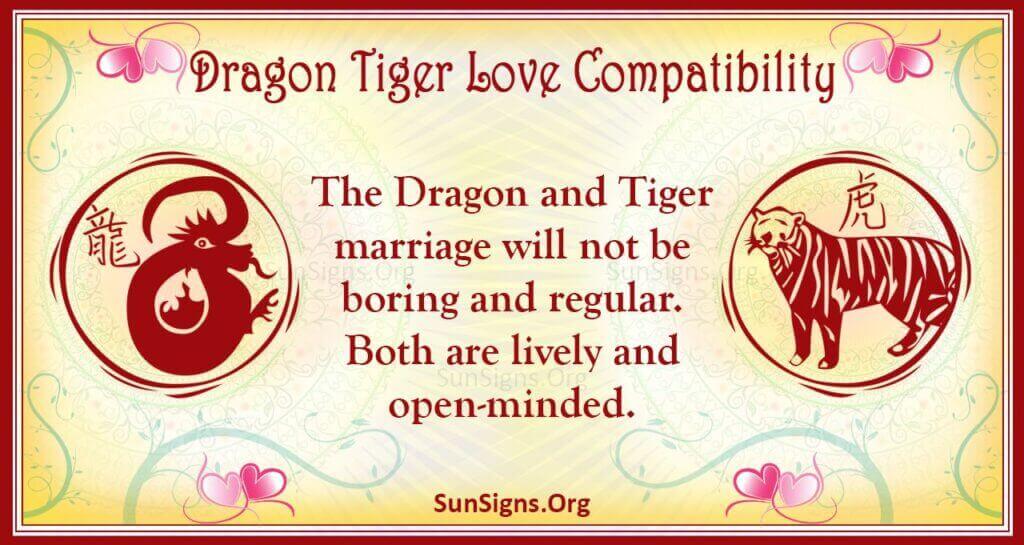 The Dragon and Tiger compatibility is excellent when it comes to love, business, or just being friends. That means their friendship is important health-wise and financially. More so, they have a great sense of humor, and they know the responsibility that they should play in the world realm. Equally, their togetherness will help them create an empire that will become greater than any ones in the entire universe.

Dragon Tiger compatibility explains the impacts you will earn by working together with your friend. Basically, a good friend should understand what is good for your relationship. In other words, you not only be concerned about your comfort, but also you should take concern about your future life. Equally, it will be a great thing to be with someone who will understand your needs and will help you whenever you need assistance.