The Dragons are considered the shining stars of the Chinese Zodiac. Those born under the Chinese sign of the Dragon enjoy great luck and prosperity. They are strong, charismatic leaders and generous romantic lovers.


They are naturally intelligent and look for partners who can live up to their perfectionist standards in intellect, looks and ability. They impart a spark of fire to everything they touch. When two Dragons fall in love, the result is pure magic. 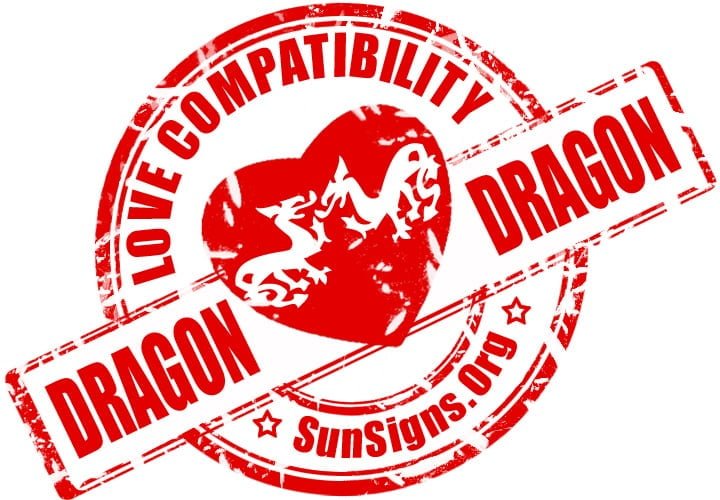 A Dragon Dragon relationship explodes with personality and passion. They are great leaders, love to be in control and love to clash and challenge each other. They need to be the centers of their worlds. This love compatibility is most powerful when each Dragon already has a place of their own to shine. In this situation, they support each other. If they are competing for the center of attention, they will make winning the competition more important than the love relationship.


The Dragon Dragon as soulmates will do best when they can feed each other’s need for flattery and attention. As attentive and flamboyant lovers, as long as they aren’t competing, they will naturally admire the skill and passion in the other and stroke each other’s egos. They understand each other well and can build an enduring bond with each other.

Socially, a Dragon Dragon couple is the life of the party. Others gravitate to their energy. They will pursue thrill-seeking activities, such as skydiving or mountain climbing, and will push each other to ever greater achievements. They will be very spontaneous, heading off on an adventure at a moment’s notice. They’ll have an entourage of admiring friends around at all times.

In a Dragon Dragon friendship, they rarely put romance ahead of their own ambitions. They are independent and will always retain their autonomy, even in a committed relationship. They will support each other fiercely as long as they don’t have to sacrifice their own desires to do so. However, they are generous and love to lavish attention on their mates. They will celebrate anniversaries, birthdays and holidays in wild style.

When a dragon male is dating a female dragon, they need to be in control. Their intolerance for being corrected will throw this couple into regular clashes. They will fight hot, fast and often, but won’t hold grudges and will continue on after the fight as if nothing had happened. In fact, their admiration for the spirit in their partner will just increase their love bond. A Dragon will rarely breakup with another Dragon.

In bed, a Dragon man and dragon woman match is fiery, passionate and loving. They are inventive and curious about sexual positions. They will explore unusual sexual techniques. Because they both need to be in control, the couple of this zodiac sign will wrestle for control of the bedroom. The struggle between them will serve to heighten the excitement.


Because Dragons will never make love the priority in their lives, they may have several partners. While their coupling is sincere, they are not naturally monogamous. Thus a Dragon-Dragon marriage may burn out after a while. In spite of this risk, they bounce back quickly once a relationship is ended.


Dragons’ lives are blessed with great luck, which means they will be prosperous, but they will tend to rely on their luck and might make hasty or risky decisions. Two Dragons together may encourage each other to make risky decisions. They will live on the edge in business and finance, but they are comfortable there.