Chinese Dragon Symbolism is totally different from how other cultures worldwide view the dragon. They have a mythical animal that is a dragon or that is much like a dragon. All these types of creatures have different significance and symbolism around them. In western countries in Europe, people look down upon the dragon. In these countries, the dragon is a dinosaur-like creature with wings. They love to cause trouble, murder and steal. However, the dragon is not always seen this way in other countries.

In Asian countries, especially China, the dragon looks and people symbolize it much differently. These dragons are not likely to breathe fire, they don’t have wings, and they look much more like snakes than dinosaurs. These dragons are generally seen to be benevolent and kind, even lucky! This article will discuss nine different types of Chinese dragons and their importance in the dragon myth.

Chinese Dragon In Origins and Art

Chinese mythology, folklore, and culture recognize the Chinese dragon as a legendary creature. Their animal form looks like a snake with four legs. People in China believe that dragons have powers that control rainfall, floods, typhoons, and water. Powerful people like the emperor of China used the dragon to symbolize power, strength, and good luck. The Chinese also compared outstanding people in society to the dragon.

In most western stories, people portray dragons as dangerous, evil, and breathing fire creatures. But the Chinese say their dragons are lucky and good. Emperors who ruled in the Tang dynasty had dragon motifs on their robes as an imperial symbol. The Son of Heaven was designated to use the two-horned five-clawed dragon during the Yuan dynasty. The princes and nobles used the four-clawed dragon.

Chinese Dragon In Festivals and Celebrations

The Chinese people cherish the dragon dance a lot. They perform it in many celebrations like the Chinese New Year. They do this by creating a long dragon to a length of up to 70 meters. This is made from hoops of bamboo and covered with gleaming fabric. A team of dancers then hold it high while dancing rhythmically to Chinese music and drum sounds. The loud noises followed by an aggressive dance are a dragon symbol of warding off evil spirits.

Another activity during celebrations is dragon boat racing. This is where boats that race through the waters in Chinese cities are fully decorated like Chinese dragons. The front of the boat has a carved dragon head, and the back has a long tail. These boats are long enough to carry 20 paddlers. The boat racing is always interesting and attracts many people to celebrate their custom during the traditional dragon boat festival. 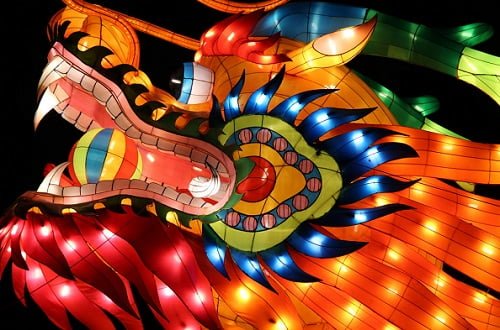 You can see many dragon elements in China even though Chinese dragons do not exist in real life. On the ancient imperial buildings in the forbidden city, the Chinese dragon symbols show the sovereignty of emperors. The emperors named their sons “seeds of dragons,” they wore “dragon robes,” and sat on “dragon chairs.”

If you enter the forbidden city, you can see drawings of the Chinese dragon symbolism nearly everywhere. The nine sons of the dragon are drawn on the golden roof. The stone floor has images of the dragon. The imperial chair is also decorated with the dragon, and the wood sculptures placed on the pillars have dragon images.

Many imperial Robes and Museum Artifacts found in Chinese museums are embroidered with Chinese dragons. Their similarity may make them look boring. But a closer look at the dragon’s color, gestures, and several toes, will make you see that they are different. The difference is a sign of supremacy among the ancient emperors. For instance, the dragon found on an emperor’s robe has four paws with five toes on each. The one found on the vassal’s robe only has four toes on each paw.

Many Chinese opera shows have dragon symbols in their titles. It is also possible to see dragon images on imperial robes worn by opera actors playing imperial family roles. If you visit China, almost everywhere you will go to an attraction named after a dragon. Visitors can visit Hong Kong and hike on the Dragon’s Back trail that has nice views.

There are nine major types of dragons in Chinese mythology. Nearly all Chinese dragons fall into one of these nine categories.

People think of The Dragon King as the last type of dragon. They think that this dragon is so powerful that it needs to be made up of four other dragons to function. These four dragons rule the four seas near China.

The homeless dragon lives in the oceans. It sometimes goes by the name Il.

People thought that The horned dragon was the most powerful in Chinese mythology. This doesn’t mean that it was evil, though. Chinese citizens also called this dragon “Lung.” This dragon, as powerful as it was, was deaf. The horned dragon could also make it rain at will.

It was strange for people to depict Chinese dragons with wings. As a result, this was a unique type of winged dragon. There is not much else that is special about it, though.

This type of dragon was essential in Chinese mythology. This dragon also can be called the “T’ien Lung” dragon. This dragon lives in the sky. It is this dragon’s job to protect the gods that live in the sky to make sure that they do not fall to earth.

This dragon is in control of a couple of the elements: wind and rain. It is this dragon’s job to take care of these elements and use them for the human’s benefit.

This dragon lives in the water. It could have very easily inspired stories of sea monsters.

Yellow is a highly symbolic color in Chinese symbolism. It has a lot to do with luck and power. This dragon was also said to have introduced Chinese writing to the ancient Emperor Fu Shi. This dragon also lives in the water.

The Dragon of Hidden Treasures

Like many western dragons, this dragon was also said to hoard and protect treasures or other kinds of wealth or money. It was like a giant magical guard-dog.

All these types of dragons contributed to Chinese mythology. You can find symbols of these dragons on many objects in China like gongs, bells, fiddles and other instruments, tables, books, temples, and other monuments, bridges, swords, and anything else you might be able to think of. Having a symbol of a Chinese dragon around you is said to bring good luck, prosperity, happiness, and sometimes wealth.

Chinese dragon symbolism does not refer to factual creatures and no evidence shows that they actually exist to this present day. The dragon is among the 12 Chinese zodiac signs. In ancient China, common people were not allowed to have pictures of dragons on their items. Dragons were only reserved for emperors. Chinese dragon symbolic meaning portrays them as powerful, lucky, and propitious, unlike the monsters portrayed in the west.