Dragon and Dog compatibility brings the sense that everyone is good because they have different qualities from each other. That means you should not allow misunderstanding to come between you. Besides, that should be an opportunity to work together and give everyone a chance to show what they have. Perhaps, your unity, especially at the workplace, is one significant aspect that will change the world. Equally, the world belongs to people who work together and exercise love at all costs.

Are Dragon and Dog compatible? People with different purposes and skills understand each other because they have common goals. The goal is to become happy and make everyone in the surroundings happy. So, you should understand, and everyone should swallow their pride and work together. Notably, the world should become a different place full of great people who accept and initiate change.

The two Chinese zodiac signs of the dragon and the dog will need to put a lot of effort into seeing where each is coming from. They both need to understand what ambitions the other has. Neither will want to step back and let the other have their way. It will be better if you have an ambitious partner who sees greatness in you. In other words, you see each other as great people going for something great for their lives. Equally, take your time in everything you do because better things come for those who are patient.

The Dragon woman and Dog man friendship will be full of pride and force.  Both might want to take on traits of the other. They both will be good leaders but in different ways. Besides, if you want to become a leader, marry someone with leadership qualities. Specifically, that will allow you to go in the same direction as you push yourselves forward. Equally, your partner is your helper and your priority. 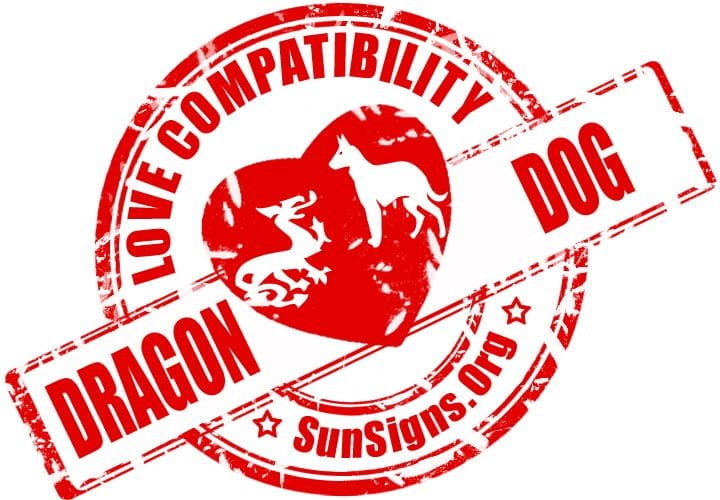 The dragon and dog relationship might have a lot of disagreements due to the differences in their personalities. If the dragon dog couple wants to be happy together, they will need to learn how to compromise with each other as much as they can. Also, it would help if you made early corrections whenever you find yourself on the wrong path. Notably, it would help if you kept a lookout for each other as you move forward in life.

The dragon dating the dog will likely be intensely attracted to each other. They are different enough that eventually, they will have problems and break up. The dragon and dog in bed sexually might share a passionate physical connection. Other than this, they might more likely be arguing all the time. Perhaps, any arguments should be dealt with somewhere private where both of you are involved. Notably, making your life personal is one thing that will bring a solid bond to your family.

The dragon might see the dog as trying to manipulate its emotions. They will express their feelings as soon as they feel them. The dragon male and female adore independence. They would instead use domineering methods. Besides, you should be in a position to control the feelings of your partner, especially when they are facing rough times. Equally, it is a show of how responsible and caring you are.

The Chinese dog sign will likely not appreciate this. They want to communicate their thoughts but are also very invested in avoiding confrontation. They will easily sense emotions out of balance. Besides, they will spend a lot of time alone trying to keep their emotions in check. On the other hand, you should spend most of your time doing things that will boost your relationship.

The Dog male and female dogs are very flexible and can get along with practically everybody. Their mood swings will annoy their lover. They are not manipulative but moody and will have difficulty trusting others. They desire devotion and teamwork. Probably, the aspect of togetherness is one that everyone is looking up to.

The dragon and dog soulmates will likely spend a lot of time disagreeing. They have very different attitudes. Both these Chinese astrology signs can be aggressive and willful but in different ways. Besides, greatness belongs to those who sort out their misunderstanding and work together as a team again. They believe in the power of forgiveness.

The dog man is gracious and will try to unite others. They will not appreciate the dominating dragon woman and might come to dislike them for it. If the dog woman is the subject of the authoritarian methods of the dragon man, they will likely end up with hurt feelings. They might then become defensive and want to get back at their partner.

The dragon and dog marriage can be challenging. Both will have to change if they want this relationship’s love compatibility to be pleasant. Besides, everything will be simple when you do it efficiently. In other words, you should not complicate your moves to make others happy. 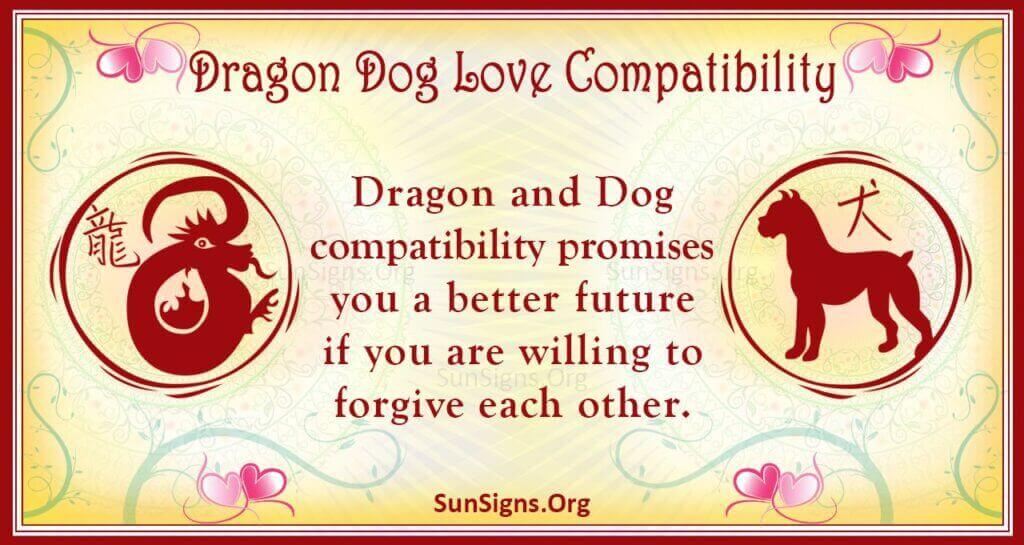 The dragon and dog in love will find it difficult to compromise. Because of this, the dragon dog couple will have difficulty having a successful relationship. What comes when two great people come together? The world will become significant for everyone around.

Dragon Dog compatibility promises a better future if you are willing to forgive each other. Holding grudges is not the way to go, but it will only create more problems. Equally, take life simply by giving everyone a second chance and forgetting what happened.