Feng Shui can be described as a Chinese art of arrangement. One aspect of the art is coloring, where each color is used to symbolize something. By using the right colors in Feng Shui one can bring prosperity, good health, and productivity. Let’s read about the red color in Feng Shui.

Among the many elements of Feng Shui, color is one of the most important aspects. Feng Shui colors will bring certain forms of energy, as positive or negative. Hence, it is important to pay attention to how we color our homes or workplaces to ensure that we attract positive forces.

The color red is one of the important elements of the Feng Shui colors. It is a strong color that brings personal associations compared to any other color. Red is stimulating and exciting, characteristics that come by due to the positive energies it brings.

So, red increases the amount of confidence that individuals have elevates enthusiasm and encourages action. Feng Shui art shows that red is associated with fire, the south, and summer. Its symbolism of fire is meant to ignite love at home. Red is a sign of both good and bad, as it can bring anger and violence or love and passion.

Also, research has shown that the color red can positively affect the body, like increased respiratory rate or escalated blood pressure. In our day-to-day activities, red is used by fire trucks and stop signs because it is evident and attracts attention. Red is hence a significant color. Thus, this article shows what it symbolizes according to the Feng Shui culture of China.

#1.The Color of Fame and Prosperity

Red is widely known as an attractive and auspicious color. The attraction and attention that it brings can hence bring prominence to an individual. It is mostly used on doors to attract attention to the house and bring prosperity to the family inside.

According to Feng Shui, it is known as the color of the south. People from the south are known for their fame and prosperity.

In China and Japan top-ranking officials paint their front doors red as a symbolism of popularity and well-being. Most doors in China face south to bring positive and strong energy that comes from that direction. Red is well known for the “Power of Nine,” which is believed to bring out prestige and affluence.

It involves placing nine items around places that you mostly use, like places of work. Individuals can place either nine red books or candles to bring success and fame in whatever they do. It also brings an energy that helps individuals work hard to earn their dreams.

#2.The Color of Hospitality

The red color is well known for its warm and welcoming look. Painting it on front doors in places like restaurants shows hospitality and goodwill. Red energizes people and makes them hungry. That is why people use it in dining areas. It also stimulates appetite and craving for food.

#3.The Color of Luck

Good luck tokens are activated by color, red to bring luck to the individual. People also use it in their businesses to attract fortune to ensure that their business is successful.

#4.The Color of Power

Leaders like Emperors used the red color to show their power. It was the main color of the Zhou Dynasty. Also, red was in the emblem of the dynasty. The Red Eyebrow Rebellion brought down Wang Mang’s brief reign of the Han Dynasty.

The god of war, Guandi, is also symbolized by the color red. But, all these cases show that the color red is a symbolism of power. High-ranking officials in the government or very successful business people color their homes red to symbolize the vast amounts of power they possess.

#5.The Color of Energy and Hardwork

Red shows energy and hard work. Paint it where individuals want to be inspired to work hard in their lives. Workplaces in red bring out energy and willingness to put in more effort when working.

Red flowers or red pots in workplaces bring out that willingness to endure. Red addd some extra oomph when it touches anything and hence brings bursts of energy. More business or hard work can be stimulated by placing office equipment on red papers or simply painting the office table red.

Have a lamp that illuminates red at the corner of the office. But this light stimulates workers to endure and work even harder.

#6.The Color of Love

Using the color red in the bedroom invigorates sexual desire. Red candles and roses can be used. It is a good color for a couple that wants to promote love in their relationship. Red flowers can be placed in the living room or the bedroom to add more romance and love to the couple.

The color red symbolizes a family’s love. There should be touches of red in the whole house, be it the children’s bedroom, living room, or kitchen. Red will be a love symbol in the family and will ensure that everybody is happy. It also shows a sociable and fun family.

During a Chinese wedding, the bride dresses in red as a sign of happiness and good fortune. Times are changing now, and many Chinese brides are opting to go for white rather than their traditional red, just like the Westerns do.

In conclusion, red stimulates the deeper passion of sex within lovers and hence a good color for couples experiencing problems. However, do not overdo it because it will lead to disagreements, break-ups, and hatred.

But not everything is good about the color red. Too much use can lead to anger. It can also lead to shame and envy from other people. One should be used in small amounts in workplaces and the living room. 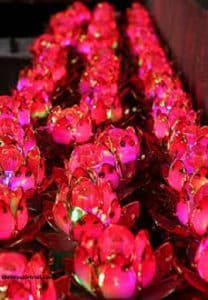 It is also the color of hatred. The color red is used too much. Also, it can lead to aggression and arguments or, in other words, too much fire—so little amounts of red lead to fear.

Where to Avoid Using Red

Do not use red in rooms where older people live. This is not a good color for sick people. Also, do not take red flowers to your loved ones in hospitals.

In conclusion, the above article has clearly depicted what color red symbolizes according to the Feng Shui art. Hence, it is vital for individuals who want to use Feng Shui to color their houses to pay attention to the details stated.

Feng Shui is a good art, and people should embrace it to ensure they can lead good and meaningful lives. Do not just paint your house red because your neighbor has done so, do it because you want to symbolize something.