How good or bad is the love compatibility between a Capricorn and Scorpio emotionally, mentally and sexually? Read on…

The Capricorn and Scorpio love compatibility in a romantic relationship will be able to grow and mature on its own. However, they will have a loving relationship and they will learn the rewards of being a couple. They might be reluctant to share themselves with each other at first. They will be emotionally cautious. Because of this, they might dampen the initial impact of the Capricorn Scorpio relationship.

The goat and the scorpion will be able to learn a lot from each other. They will learn lessons that might be hard to hear but they will be worth the trouble that they might make. Capricorn is stable and competent. Scorpio will be able to learn how to keep their heated emotions in control. The goat will have to be careful to not seem too emotionally shallow. They might be critical and the scorpion will be very sensitive. The scorpion will not like comments that are more distant. They want depth and passionate feelings. They will want honest sincerity in all situations. They will especially want sincerity in love.

The Capricorn personality will be busy with their accomplishments and how other people will see them. They might fail to take a chance with their emotions. They can learn about the pleasure they can have from deeply knowing other people. Scorpio will be able to teach the goat the value of looking below the surface. They will both adore committing to a project. If they decide that the relationship is their next project, nothing can stop them.

Capricorn is a Cardinal sign. They might not seem like the most romantic sign of the zodiac. However, they are very good at business and planning. They could easily devise elegant, well planned romantic nights. If the Capricorn man or Capricorn woman shows a lot of initiative then the Scorpion will want to jump in. Scorpio is a Fixed sign. They will be excited to follow the goat’s ideas. They might be somewhat smug and throw in their own ideas. The Scorpio personality is more than capable of throwing out some sharp comments under their breath.

However, they might also use a sexy tone of voice and Capricorn will not even notice what they said. The goat with love on their mind should listen to Scorpio’s voice carefully for any subtle shades or undertones. They should pay a lot of attention to body language. They can both definitely be stubborn. This could lead to arguments. Scorpio will fall hard. They will be so emotionally invested, it will not be easy for them to return. However, Capricorn can be distant. They will both have to realize this and accept it if they want a successful Capricorn Scorpio marriage. 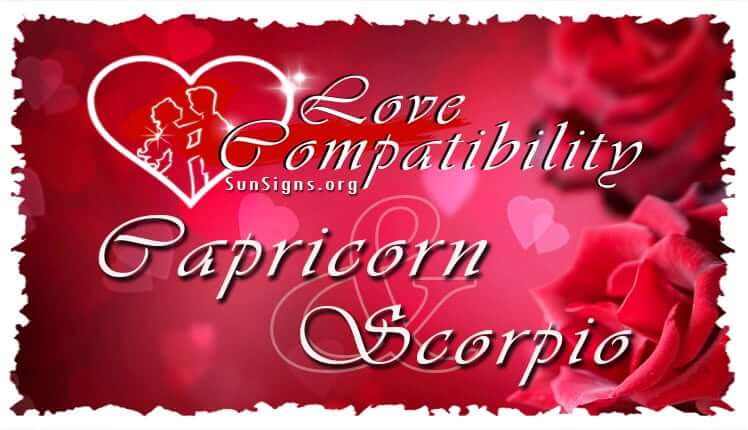 The goat and the scorpion will have a relationship marked by determination to make progress. They will make clear goals for their life together. There will likely not be much that will get in their way of accomplishing them. They will mix being rational with intuition and insight. Because of this, the Capricorn Scorpio soul mates will have a powerful team.

They will have a strong zodiac compatibility because of physical attraction. Capricorn has a seductive nature that works well with Scorpio’s passionate nature. The goat is serious and sensible but the Scorpion can give them steamy enthusiasm. The Capricorn Scorpio in bed will both need a sexual bond to be compatible.

The planet Saturn rules over Capricorn. It will teach the big lessons in life. They will teach how to work hard, be diligent, and have motivation and responsibility. The planets Mars and Pluto rule over Scorpio. They will be aggressive and brave. They will symbolize physical energy, rebirth, and renewal. The three planets can mix to make a diligent love relationship. They will have a relationship bound by the goat’s ambitious action and the scorpion’s fierce emotion. They will make an exciting team for business. At the same time, their achieving energy will translate well to affection and love.

Capricorn is an Earth sign and Scorpio is a Water sign. Earth signs will be concerned with rational matters and material possessions. Water signs will usually mold to the shape of the situation they are in and act with emotion rather than logic. Capricorn sun sign will be stable and goal focused. Scorpio star sign will be exciting and will transition by nature. They will make a quiet team. Whether they will move on to love will rely on whether or not love is their goal. If love is their goal, the Capricorn Scorpio love compatibility will be successful.

However, they do not have a safety valve. They will both need to develop hobbies and interests away from their relationship. If they can do this, they can give each other the space they need when they are under stress. Capricorn and Scorpio being compatible in love will mean taking responsibility to each other and to the family they will eventually have. They will do this very well but they might not have as much pleasure as they could.

However, Capricorn is a cardinal sign and they will likely get their way more than the scorpion. It might only be on the surface. Scorpio can be manipulative. They will smile while they work behind the scenes to get what they want. Power struggles will not harm the relationship if the Capricorn man or Capricorn woman finds this amusing instead of infuriating.

The fights they have will obviously show their differences. The Scorpio male or Scorpio female will be angry and seething. They will brood and pout to try to get a reaction out of the goat. Capricorn is wise. They will watch Scorpio’s display and then nod and walk away. They will meet their lover’s anger with calm indifference.

The goat and the scorpion will not have a lot of reasons to fight. They will have similar views on money, parenting, sex, fidelity, career, and social life. Other than random fights for control, they will not have many disagreements. But if these fights get out of hand then a Capricorn Scorpio breakup is guaranteed.

In this Capricorn Scorpio love compatibility both have a lot to learn from each other. They are both smart enough to realize it. They will both want to learn from each other. Capricorn is distant but they can learn the good and bad of exploring emotional depths from the Scorpion. Scorpio can learn how to bring their emotions under control. They will have a love compatibility that has a learning curve in a good way.