Capricorn Woman And Scorpio Man – An Interesting And Intellectual Match

How compatible are Capricorn women and Scorpio men mentally, emotionally and sexually? When it comes to caution and privacy, the Capricorn woman has met her match in the Scorpio man. While she’s trying to decipher him, he’s already discovered what makes her tick. He admires how down to earth and reasonable she is, but he will always remain a mystery to her.

The female goat and the male scorpion don’t meet easily, for she is more of a homebody and he is often out and about surrounded by people. The Scorpio man doesn’t choose this lifestyle, but his deep and intriguing nature draws many people to him. The Capricorn woman is no exception, for she wants to see what lies beneath his strong, quiet demeanor.

Once the Capricorn woman and Scorpio man start talking, they realize they share the same dark humor and similar witty banter. They connect on a practical level, where he appreciates how stable and self-reliant she is and she welcomes his careful consideration when it comes to making decisions.

The Capricorn and Scorpio want their courtship to develop naturally out of mutual respect and honesty, so there are no games or tricks involved. They are genuine and sincere with each other, and this helps to move their relationship into the bedroom. Even though the Capricorn woman Scorpio man are both cool and detached in reality, they have a different side to them in the bedroom.

The Capricorn female enjoys a slow, steady physical experience while he adds passion and excitement to the mix. Normally she doesn’t care about thrills in sex, but the Scorpio male is such a dynamic lover that he helps to bring her out of her shell. This is where she gets to see deeper beneath the surface of this water sun sign, and she realizes just how many layers her lover has. The Capricorn woman wants to explore every level, and he lets her in to a certain degree.

Neither Capricorn women nor Scorpio men like to be restrained, for they have places to go and things to do. She is always climbing the corporate ladder and he has his own ambitions, and they can always bond over their success. They will have a comfortable household and lead a stable life, which is very important for both of them. 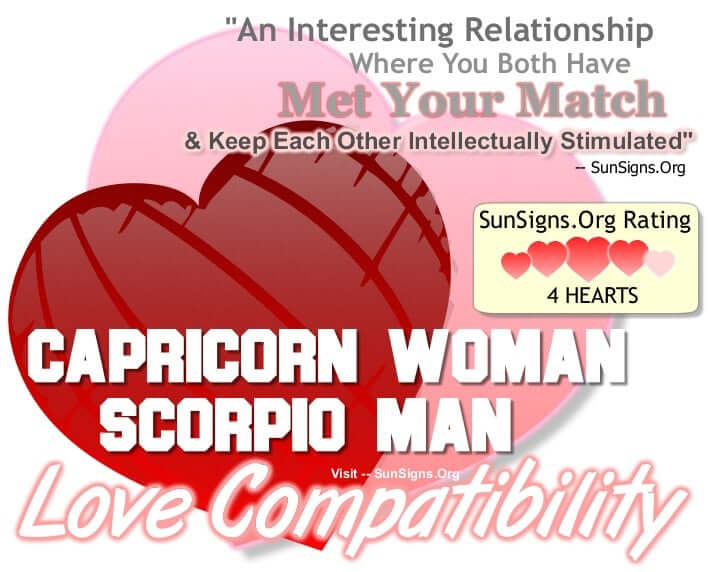 Every Scorpio has their secrets, and he’ll stop her at some point. This may be a turn off for Capricorn, since she sees this as possible motive to distrust him. He will have to find ways to reassure her that he is true and faithful, and she will have to rely on their strong foundation to believe him.

And this kind of trust will have to continue outside the bedroom as well. Although the Capricorn Scorpio couple  are both capable of making rational decisions, she likes to take the lead automatically and he is not good at relinquishing control. Here, they will have to find some kind of balance between her controlling nature and his dominant personality.

The only time there will be drama is when the Capricorn woman’s stubborn manner pushes him to his limits. That’s when he will bring out his stinger and lash out at her. This will be a surprise to her at first, but the calm and patient Capricorn zodiac personality allows her to stay and argue her point.

Capricorn is a cardinal earth sign whereas Scorpio is a fixed water sign, the Capricorn woman Scorpio man compatibility gets a FOUR Hearts rating. Through persistent and tough discourse the Capricorn Scorpio match should be able to work out their differences. And as long as they are marching down the same path, they will have good love compatibility and support each other forever.