You are a Scorpio if you were born between October 24th through November 22nd. When a Scorpio personality has a goal they go for it until they can accomplish it.

Scorpio traits show you are very determined and independent people. The Scorpio zodiac sign prefers to work alone, and to be alone in general. You could say that in general Scorpio is an introvert.

Scorpio personality traits show they are resourceful people, they are also good at paying attention to things that others may not notice. This skill can help both in school and later in a job. Scorpio should try to get a job that involves then having to pay close attention to facts and small details.

They can be a leader at school or at their job, but it is just most important to them that they are doing their job well. While it is not important to be in a place of power as they first start working, a Scorpio male or female is ambitious and will eventually do whatever they can to climb the business ladder. A Scorpio personality will not be completely satisfied with themselves until they are in charge.

Scorpio characteristics show they usually has many goals that they want to achieve, and no matter how simple or difficult the task is, Scorpio will do what they can to get to their goal. Scorpio won’t let anyone get in their way to success. They may be dynamic in their approach to things. 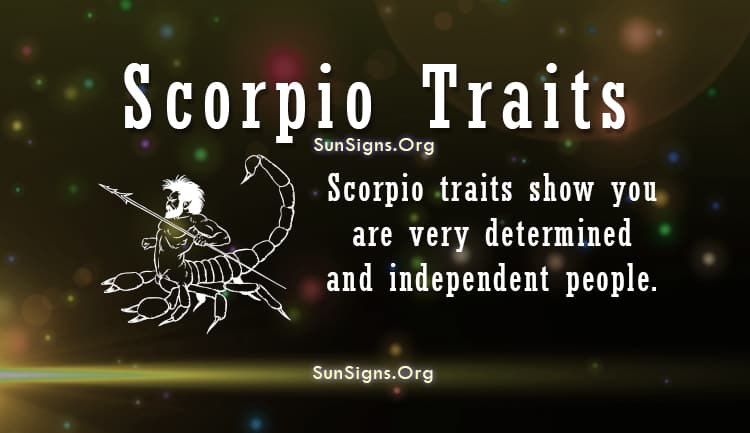 The Scorpio traits also show they think outside-the-box so that they can seem more creative and worthy of a promotion or other opportunity than their opponent. A Scorpio isn’t above manipulating others if that’s what it takes to be successful. For this reason, other people might become wary of becoming friends with a Scorpio.

The Scorpio men and women tend to be complicated people, so almost every aspect of their life is complicated as well. Since Scorpio like to be alone so often, they have a hard time making friends. Scorpio’s friendships are complicated.

At times a Scorpio personality may want to go on an adventure and have a good time with their friends, and at other times, Scorpio will want to be alone. They may become moody and want to alienate themselves from their friends for a little while.

On the other hand, Scorpio zodiac sign can also become almost possessive of their friends, wanting to spend every moment with them. Life as a Scorpio has many ups and downs, but not so many places to rest in the middle.

Because of Scorpio’s manipulative nature, they are often suspicious of other people’s motives. It will take a while for a Scorpio to trust someone else because of this. Scorpions need friends and romantic interests that are trustworthy and honest, or else the relationship will not last very long.

The Scorpio characteristics show they can also become jealous easily when it comes to other people’s success or when they are in a relationship. If someone does better than Scorpio in something, then they will become focused on improving themselves on that task so that they can be better for the next time an opportunity arises.

Having a romantic relationship with a Scorpio male or female can be difficult at times. No doubt, the Scorpion will want to be in charge of the relationship.

The Scorpio personality traits show they are more likely to want to make most of the major decisions within the relationship. This may annoy some partners because it may seem like Scorpio is being bossy.

Like stated before, Scorpio can also become jealous and possessive easily. If they do not have an entirely trustworthy partner then things will not go well. Being with a Scorpio isn’t all that bad though.

Scorpio has been known to be spontaneous and plan romantic adventures for their partners. Sex with Scorpio is adventure all it’s own as well. If you can keep a Scorpio happy, then they’ll treat you right.