How good or bad is the love compatibility between a Capricorn and Capricorn emotionally, mentally and sexually? Read on…

There’s one word to describe two Capricorns in a relationship, POWERHOUSE!! These two watery goats really get things done and thoroughly understand each other, in the process. These are two people who really “get” what the other is about.

The Capricorn Capricorn soulmates are hardworking, responsible, conscientious, pay attention to details, and follow through until the very end. Like the goat glyph that represents this zodiac sign, these two are tough cookies! The one drawback of this Capricorn Capricorn love compatibility is that, they may be too tough and rigid, even on each other. 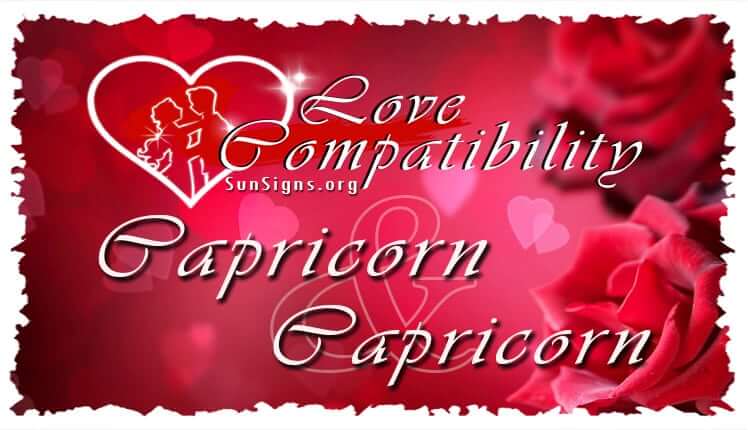 Capricorn, because you’re such a hard worker, were you the child who did all of the work for school projects? Were you the one who studied hard and everyone copied your notes? This is because you weren’t with another Capricorn partner.

Because, when you meet that Capricorn love of yours, you feel like you have someone working along side you, and they are working just as hard as you are!! It’s a nice feeling, isn’t it? Because there’s one thing a Capricorn loves to do, and that’s work. Actually Capricorns are made to work, they’re built for it, and they thrive off of it!

Both Capricorn Capricorn in love not only want to work hard, but are willing to work their way to the top. You both desire to be the king and queen of your kingdom and you have no problem climbing that ladder together. A Capricorn will never say, “Honey, you spend too much time at the office…”. On the contrary, Capricorns applaud a fellow workaholic! And you two workaholics are made for each other!

However, unlike Sagittarius or Leo, Capricorn person does not claw their way to the top because they want fame and recognition. They want emotional and financial security. In fact, their emotional security comes from financial security – the more Capricorn has in the bank, the more calm and secure they feel, and in this case, both the Capricorns in this marriage  feel this way. This is good news, because neither Capricorn likes their security to be challenged or for the status quo to be disrupted. These Cardinal signs don’t like anything to change, except the increasing dollar amount in their bank account.

Need a loan? Need a letter of recommendation from an esteemed and responsible member of society? Call the Capricorn and Capricorn couple! These two are pillars of the community! Quiet, likable and stable, they always have a little extra tucked away to help out and their reputation speaks volumes to whomever they vouch for.

Speaking of a pillar, once the Capricorn man or Capricorn woman feels safe and financially secure with a partner, they may have a pillar of their own to share in the bedroom! Now don’t discount this quiet predictable soul, because if you think he or she is a powerhouse at work, they’re twice that for their trusted lover. The Capricorn Capricorn in bed are especially sexually giving to someone who they feel appreciates them, doesn’t take advantage, and works along side them.

As important as it is to be responsible, there is a time and a place for it and the Capricorn born doesn’t seem to know when to stop. Truthfully, he or she is sometimes unable to turn that part of themselves off and relax once and a while. Do you feel your blood pressure rising, Capricorn? It’s because you don’t know how to let loose and have fun. Now multiply this times two!

Times become especially tense when money is tight and our normally mild mannered goat feels insecure. This is when the Capricorn Capricorn compatibility uses their horns, and it’s not a pretty sight when they’re fighting another goat with the same insecurities and horns!

Instead of discussing these insecurities, or letting loose with some fun, the couple in this Capricorn Capricorn friendship often takes it out on his or her partner in head to head (or horn to horn) fights that usually don’t solve much. Paradoxically, as productive as the Capricorn can be in the workplace, their fights are often very unproductive.

Another negative aspect of a Capricorn Capricorn relationship is vanity. You may not think that quiet, simply adorned goat has the same hang ups about their partner’s looks or status as a Leo or a Taurus, but they do—and in some ways they’re worse, because Capricorn is not open about these hang ups.

When a Capricorn is dating another Capricorn, they will loose interest in a partner if they get fired or lose their reputation, and subsequently their salary. Why? Because this, once again, disrupts their sense of security. It does not matter if it’s your partner’s fault or not; they have fallen from grace and are no longer attractive.

Speaking of attractive, don’t let the Capricorn man in love fool you about looks. They love to look good and do not like to be wrinkled with saggy skin. In this Capricorn Capricorn compatibility looks matter a lot. And they wouldn’t think twice about going in for some subtle plastic surgery procedures.

The most destructive aspect of a Capricorn Capricorn love compatibility is how secretive they are when it deals with anything to do with their reputation. They just don’t tell anyone or share with their partners. This could prove to be the main reason for a Capricorn and Capricorn breakup.

So both Capricorns need to understand that aging is inevitable and a fall from a particular position is not the “end all and be all”. Likewise, remember, it’s important to have a good reputation, but you should not let it stand in the way of your health or the well-being of your family. Besides, contrary to your inner beliefs, people are more likely to empathize and sympathize than judge you…and remember, Capricorn, you’re already judging yourself, rather harshly, I might add.

So, Capricorns, if you want to feel like you have another powerhouse by your side, to work with you through thick and thin, stick with another Capricorn as your partner. You’ll be the king and queen of your little corner of the world, with the secure nest egg to prove it! But remember Capricorns in love, your partner is aging and so are you!! Have the self-confidence and poise to grow old gracefully.

Also make sure to “air out your dirty laundry” once and a while! Address problems head on, without worrying about your reputation. Because, chances are, your reputation will only increase because you deal with any issues head-on, rather than ignoring them. And, for goodness sake, loosen up a little and have fun once in a while, you won’t regret it!