How good or bad is the love compatibility between a Capricorn and Aries emotionally, mentally and sexually? Read on…

The Capricorn and Aries love compatibility in a romantic relationship will have to work hard to keep their levels of energy up. Their approaches to life might seem like they are almost opposite. The ram will be concerned with action. They will want to do something without thinking about where the action is directed or what it will achieve. The goat will want to know how it will benefit them or whether it will benefit them at all before they do something.

The Aries personality will move very fast. Capricorn will seem to think that they risk it all. The goat does not like unnecessary risk. They will do things at a slower pace. They are more concerned with working towards a well defined goal. Their goals are usually about careers and advancing in public. They will both always get where they are going, but in different ways. The Capricorn Aries soul mates are usually going to different places.

Capricorn is an Earth sign. They will be more down to earth and rational. They prefer to ask how something will help them achieve their goals in life. Aries is a Fire sign. They are dynamic. At the same time, they will usually see what they want at that moment. They will go after it without having a plan in mind.

However, the Capricorn personality will be in control behind the scenes. They are always going to be working towards their goals in a steady way. It is important that they both understand they will need to compromise to have a successful Capricorn Aries relationship. 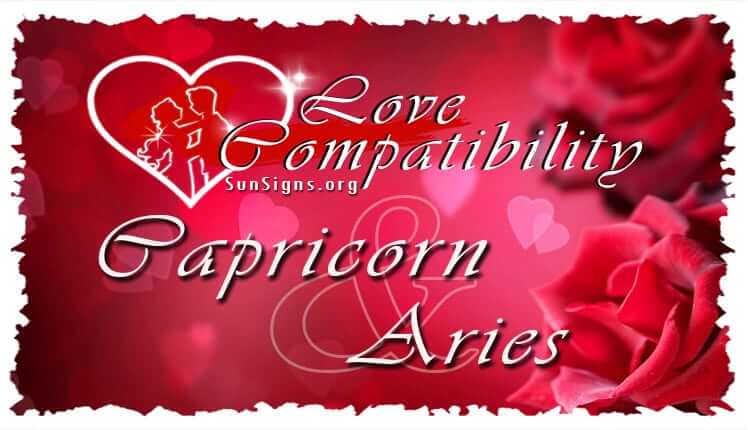 The best thing about the Capricorn Aries love compatibility in a romantic relationship is that they will both bring originality to the relationship. They will both have to learn to let each other be themselves. If they can do this they can mix their personalities and make a nice whole. They will have a difficult relationship. However it will be worth it if they can learn from each other. Their relationship will be based on love and respect for both of them. The Capricorn Aries in love will be able to overcome any troubles with good communication and goodwill.

Capricorn will be the sage of the zodiac. Aries is the hero of the zodiac. Capricorn dating Aries will be compatible together. They will have more in common than they might seem to.

The Aries zodiac sign a natural leader. Whether it is an Aries male or Aries female, no matter what age, they need to be in control. The ram is domineering and will obviously be in charge. They are noisy and flashy and naturally assertive. The Capricorn sun sign is quiet and innocent. The Capricorn compatibility will be all about being mature. The planet Saturn rules over Capricorn and is concerned with wisdom. Whether it is a Capricorn male or Capricorn female, whatever age, they will have a quiet authority to them. Capricorn Aries compatibility will work together because the Arian will not always get their way.

Every day, Capricorn and Aries couple can accomplish a lot working towards their life goals. They are both cardinal signs. They will both be fired up to achieve, diligent, and motivated. They will both be determined and resourceful. They will both want the same things in life. The love and respect both will have similar levels of passion. The goat can be somewhat serious but they will enjoy a sexual relationship. Read about Capricorn Sexuality and Aries Sexual Traits.

The Aries born might be over excited, but they can learn new things from Capricorn. The goat and the ram are compatible together because they both have a lot of respect for each other. Capricorn will be amused by Aries’ exuberant and fiery nature. At the same time, the Arian will respect the goat’s inner strength and calm attitude.

Capricorn will be typically silent and naive. Aries is much louder and more flashy. They are both very stubborn. They are going to think their way is the best way. If they want to work together, they will have to learn to compromise. They both have very different philosophies. The ram will be interested in taking the shortest path they can. The goat will be more interested in following the rules, as long as it is a proven path to success.

Aries men or Aries women will be impetuous and passionate in pursuing the one they want. They will not stop to consider whether the person they want is the right one for them. At the same time, Capricorn men and women will prefer to analyze how much a potential partner can help them advance in life. They will use this to help them decide if they want to pursue the relationship or not. Capricorn and Aries zodiac signs will meet and they might be able to have a relationship. They will be able to learn a lot from each other that they would not be able to learn on their own.

The planet Saturn rules over Capricorn and is related to karma. It has strong powers of determination. The planet Mars rules over Aries and is concerned with passion. It has the energy and motivation to get things done. The planets Saturn and Mars usually work against each other. This Capricorn and Aries compatibility will have trouble finding something in common. They will definitely be able to help each other.

Capricorn and Aries relationship might work better in a business relationship than in a romantic one. They will both be stubborn. Neither the goat nor the ram will be likely to give in. They will both need to focus their energy on something positive. If they do not, then they might be cruel or even violent to each other. They might make each other hide their emotions. Aries will have to be careful to not work against Capricorn. At the same time, Capricorn will have to be careful to not extinguish the ram’s fiery spirit.

Capricorn will give Aries wisdom and help them be more grounded in their excitement. At the same time, the ram will give the goat warmth and fire. The ram will warm the goat’s heart and give them a new interest in life. They will not always have a smooth relationship. They will both need to give each other what they need. Aries has an energy that is daring, manic, and enthusiastic. Because of this, Capricorn could have a nervous breakdown. Capricorn will insist on having cautious, rational, and smart thoughts. Because of this, the ram might be very bored and insist on a Capricorn Aries breakup.

Capricorn Aries compatibility will have a strong business relationship. They will have a strong friendship. When they work as a team, they can be unbeatable. Capricorn Aries love compatibility in a romantic relationship will work better together when they have an age gap. They will work equally well together no matter which one is the oldest. However, the roles of the sage and the hero will be the same either way. The mythological hero needs the mythological sage. However, the sage will not need the hero as much. Capricorn will be slightly emotionally distant. They can easily shut down and walk away and come back later when their partner has calmed down. Because of this, they can tolerate Aries’ fiery temper.