How good or bad is the love compatibility between a Capricorn and Leo emotionally, mentally and sexually? Read on…

The Capricorn and Leo compatibility will be encouraging. Capricorn will be more traditional, hard working, and conservative in the way they look at life. Leo strongly believes in hard work. However, they are more likely to get things done using their charisma and social skills. They will both be very devoted, especially to each other. They might not seem like they have a lot of star sign compatibility. However, the longer they are together the more they will find they have a lot in common.

The planet Saturn will rule over Capricorn. It will be about responsibility, hard work and stubbornness. They will both be able to learn from each other’s diversity. The sun will rule over Leo zodiac sign and is concerned with life, ego and self and they give off warmth and light. The Leo star sign will indeed give off this kind of energy and excitement. They will both need to pay attention to each other. The Capricorn and Leo friendship can be good together, which will lead to a lot of finished projects.

Capricorn is an Earth sign. The goat will want professional security. Leo is a Fire sign. The lion will want artistic independence. They will have a balanced romantic relationship. They will have a lot of fun spending time together. They will both want to take the time to pursue their personal interests. They will both constantly need to reassure each other of their significance. The goat and the lion might have disagreements. However, they are not likely to hurt the Capricorn Leo relationship.

Capricorn is a Cardinal sign. Leo is a Fixed sign. They will have a wild time. The lion will enjoy the unexpected. They can both be stubborn, opinionated, and motivated. They are both going to be determined when they are working towards their goals. The goat is going to want a life that is steady and has order. They will both need to agree the relationship is a good one. They will remember the value of the relationship. They will be devoted to maintaining the Capricorn and Leo love compatibility. 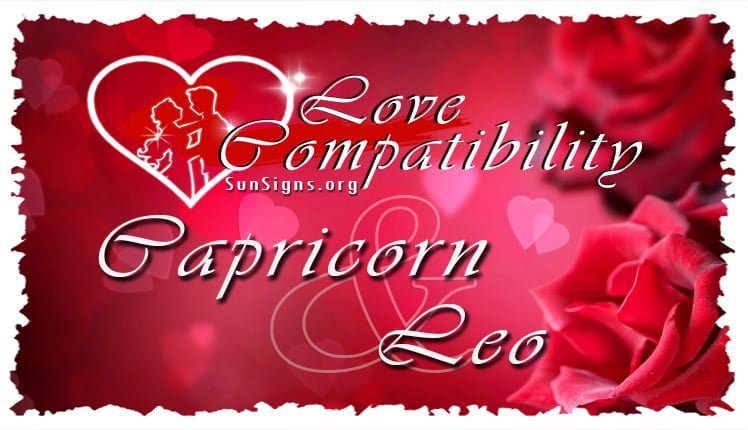 Capricorn compatibility is about being stable. They will be about hard work and a lot of respect for each other. The goat is quiet and serious by nature. The lion might think they have a boring personality. Leo is very social and friendly. They are flashy and extravagant and have a personality that is larger than life.

The Capricorn men and Capricorn women are wise and mature and might not like the lion’s nature. The goat and the lion might not seem very compatible. However, they would not be the first to seem unlikely to have a successful relationship. Even though they might seem that way, they are more than capable of having a happy relationship together. They can be completely devoted to each other.

Capricorn dating Leo will obviously have different personalities. They will have some similarities and knowing where they are will help to understand how they have a successful relationship. They are both leaders in their own kind of way. They are both looking for power and influence. They will both be hard working together. They will have a love compatibility that will accomplish a lot. They both respect each other’s skills.

Capricorn and Leo being compatible can mean they will have a very rational and productive relationship. They will be able to have a good standard of living. They will have comparable values. They can both have a lot of passion. Leo is very warm. They can warm up Capricorn’s hidden seductive side. The goat will need to trust the Leo male or Leo female. When the goat trusts the lion, they will be able to let their basic, earthy seduction come through in the sexual relationship between the Capricorn and Leo in bed.

However, their similarities might hurt the Capricorn Leo marriage. They will both want to be in control. Capricorn has all their wisdom of the mythological sage. They will be very used to giving orders and watching people follow them. The Leo man or Leo woman is bright and bold.

The goat will not like the authoritative nature of the lion. The royal is used to being the king or queen of their realm. They will not want to listen to and follow the goat’s wise advice. The Leo personality will do what they want to do. If they are not able to agree on who is in control or at least take turns being in control, their relationship might not be successful.

Capricorn and Leo compatibility will work well together when their relationship has clear lines drawn on each other’s areas of expertise. If they are both from very different areas or backgrounds, they can have a successful relationship because they can be leaders in their own areas. They will both have to compromise.

However, they will be more compatible if they are not both concerned with who is in control. They might also fight over money. Capricorn will be the one to try to balance their books and make a stable financial future for them. At the same time, Leo will spend extravagantly. They will have an overly positive view of their finances. This might end up in a Capricorn Leo breakup.

Leo is a fire sign. They are more than capable of burning the Capricorn personality with the strength and depth of their temper. At the same time, Capricorn is an earth sign. They will easily be able to extinguish Leo’s excitement by dumping a lot of sand on their fire.

Capricorn and Leo soulmates can avoid either of these scenarios when they work well together. Leo’s fire will carefully warm Capricorn’s cooler earth. At the same time, the goat will give the lion stability and direction for what they are passionate about. However it might not be easy for them to have this kind of relationship.

When Capricorn and Leo are in love, they can find a way to work through any tough spots they might have. Capricorn being in love does not mean they will be immediately compatible. They will be very willing to work on their relationship. They know that when two different personalities are in a love relationship they will both need to make some changes.

Leo men and Leo women have a lot of pride and is a fixed sign. They will be less likely to change. They can have a successful relationship but it will be because the goat will work hard.