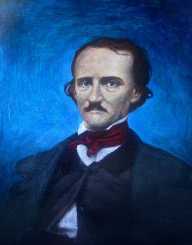 Edgar Allan Poe was known as the most influential and significant American writer of the 18 century. In fact, he will always remain to be the first author to make a professional living through this piece of writing. He was mainly inspired by several events that surrounded him at that time. His poetry alone will tell you one thing or two about the literary canon.

Edgar Poe’s notable stanzas typically ranged from his early masterpieces “To Helen” as well as mysterious ones such as “Ulalume.” He became famous for his undefined masterpiece about “The Raven” in 1845.

As the first professional of Macabre at that time; he knew how to twist the ilk of the horror story. All thanks to his masterful tales. He had an amicable sight and philosophical trait that made him write more about his overwhelmed situations. The one of a kind story that moved everyone was “The Tell-Tale Heart,” “The Pit and the Pendulum,” “The Fall of the House of Usher” and much more.

The pioneer of science fiction Edgar Allan Poe was born on 19th January 1809, Boston, Massachusetts, USA. He never knew his birth parents; both died when he was three years old. This made him live with his godfather, John Allan, who was a renowned tobacco merchant. He went to high school in London and later joined the University of Virginia in 1826. But this didn’t end up well due to the fight he had with Allan because of his gambling debts.

Edgar only studied at the University for eight months. He went on and served for two good years in the United States Army. He was lucky to earn a significant appointment at West Point. Later on, Allan made his move from the academy following the Army rules. At that time Poe had already published his poetry work without success.

In 1836, he got an editorial job in Richmond, Virginia. He later married his thirteen-year-old cousin, Clemm Virginia. He also managed to complete his factious writing work. In 1838, Poe was dismissed from his job due to heavy drinking, and they opted to vacate to Philadelphia. He was lucky to get another editorial job at Burton’s Gentleman’s Magazine as an editor. That is where he built his name by creating incisive and horrific stories such as “The Fall of the House of Usher” and “The Purloined Letter.”

In 1840, Poe managed to join with editor George Graham. At this time he managed to publish some compelling stories such as “The Murders in the Rue Morgue.” While still living his life as an editor he managed to release an edit over 35,000 copies per day. He left the Graham’s in 1842 since he, at last, wanted to open his magazine.

The Stylus was his first magazine that he owned, but it failed. He continued to publish different booklets and short stories. But his business wasn’t profitable. He had sold his story collections for $100 and had already sold few stories to magazines. But the money wasn’t enough to feed his family. At times Mrs. Clemm had to intervene in between. Poe later went back to New York in 1844.

In 1845, Edgar Allan Poe was employed as an editor age at The Broadway Journal. After a year, the journal was closed due to lack of profit and income. He opted to move his family, and both lived in a small cottage; it’s now called EST 192nd Street. Virginia’s health status started to deteriorate, and Poe was deeply distressed by the situation. She later died in 1847, just ten days after Poe’s birthday. The case caused Edgar to collapse several times due to a stressing effect. Later on, he returned to his normal state.

Early in June 1849 Edgar Allan Poe left New York and traveled to Philadelphia. He joined up with John Sartain who was his closest friend. He later went back to Richmond and stayed at the Swan Tavern Hotel. He tried to join “The Sons of Temperance” with the aim of stopping to drink. He later met with Sarah Royster Shelton with whom he planned to get married in October. He then left Richmond and went back to New York.

On September 30th, he had planned to go back to New York but took a wrong train to Baltimore. On October 3, Edgar was later found unconscious at Gunner’s Hall; and was hurriedly taken to the hospital. Allan Poe was pronounced dead on Sunday, October 7, 1849.

It wasn’t clear if he died from alcoholism, rabies as it was previously rumored or maybe he was mugged. No aspect of his life fascinates his fans. His biography will always leave a question mark and more untold stories behind. There are lots of issues that surround him, but there is no clue where to get an answer. Poe’s death will always remain a mystery.