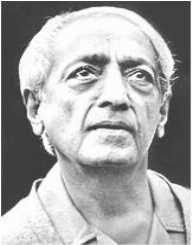 His father worked for the British colonial administration in an official capacity. His mother, much to the sadness of the family, died when Krishnamurti was ten years old.

Jiddu Krishnamurti was a very spiritual child, and would often have psychic experiences. He was also a very sickly child. He was often beaten by his school teachers and also by his father, who thought he might be mentally impaired.

Jiddu Krishnamurti's father retired in 1907. As he couldn’t survive retirement with no means of living, he found himself employment at the Theosophical Society at Adya. The family were given accommodation near the grounds of the society and moved in early 1909.

Jiddu Krishnamurti and his brother were educated abroad, and Jiddu Krishnamurti quickly became very competent in the English language. During this period, one of his mentors was Annie Besant, with whom he established a strong bond.

Over this time also, Jiddu Krishnamurti's father had agreed that Besant could become the legal guardian of his two boys (Jiddu Krishnamurti and his brother, Nitya). He tried to renege on the arrangement, but after a long legal battle, Besant won and took custody of the boys. The two boys became much closer as they stuck together.

The Order of the Star in the East (OSE) was established by the Theosophical Society in 1911. Its purpose was to get the world ready for the arrival of the World Teacher. Jiddu Krishnamurti was the head of the OSE. His writings soon started making their way out into the public domain, and he followed this by a speaking tour in 1914 over several countries in Europe, but always with chaperones from the Theosophical Society.

Jiddu Krishnamurti delivered lectures, meetings, and discussions throughout the world, once the war was over. Nitya had become his Organizing Secretary in the OSE.

Throughout his travels, he ended up in California. This was when the brothers met Rosalind Williams. It was also the first time they had no chaperones from the Society with them. Supporters of Jiddu Krishnamurti purchased a property in Ojai Valley for the brothers, and this was to become Jiddu Krishnamurti's base.

In the second half of 1922, Jiddu Krishnamurti had an intense spiritual experience. These experiences would come and go throughout the rest of his life, and couldn’t be explained by anybody. As news of the experiences became known, those attending the Theosophical Society Convention in 1925, were expecting significant events to take place.

Nitya, meanwhile, was taken very ill, and in November 1925, he died. This was a significant turning point for Jiddu Krishnamurti. His brother’s death was unexpected but completely devastating.

Over the ensuing years, Jiddu Krishnamurti became independent of the OSE’s mandate, turning his back on Leadbeater and Besant. Eventually, he shut the Order down. He continued to distance himself from the Theosophical Society and resigned from trusts and any other affiliations he had with them.

Between 1930 and 1940, Jiddu Krishnamurti did speaking tours all over the world. His time was spent speaking or meditating. From 1940 to 1944, he took a break and managed his farm in Ojai.

He started speaking again in 1944, and the talks, as well as other material, were published by Jiddu Krishnamurti Writings Inc. Jiddu Krishnamurti returned to India in 1947 on a speaking tour, and over the next few decades continued with his teachings, meeting many prominent people in the process.

Jiddu Krishnamurti wrote many books, and they are still available in the marketplace.

The Jiddu Krishnamurti Foundation was established in 1928. It runs several schools around the world, including in India. His mandate for the schools is to have a global outlook rather than an individual outlook, to have concern for humanity and the environment, and to have a spiritual nature.

His many teachings, lectures, and literature are available for generations to follow and are faithfully distributed by his followers.