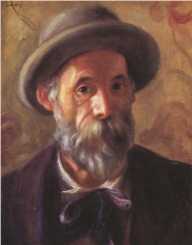 French Impressionist artist Pierre-Auguste Renoir was born in Limoges, France on the 25 February 1841. His family moved to Paris during his childhood, and they lived close to the Louvre art gallery which he used to frequent.

Pierre-Auguste Renoir was a pupil at a Catholic school in Paris. He showed an early talent for drawing.

As a young boy of thirteen, Pierre-Auguste Renoir was apprenticed to a factory in Paris where he was taught the art of painting on porcelain.

In the early 1860s, Pierre-Auguste Renoir became a pupil of the artist Charles Gleyre and met fellow artists Monet, Bazille, and Sisley. These four young artists were instrumental in the emergence of Impressionism. The group painted scenes alongside the Seine and also in Fontainebleau forest. Renoir’s focus was on portraits and figure painting, particularly female nudes. Renoir and Monet painted at La Grenouillere, a bathing and boating area in the summer of 1869 and this stage marked the beginning of Impressionism.

Pierre-Auguste Renoir came to public attention in 1868 with the exhibition of his painting Lise with a Parasol (1867). In April 1974 Renoir and a group of other artists including Monet held the first Impressionist exhibition. There was some hostility to the new movement, and most reviews were unfavorable, but Renoir’s work was held in relatively high esteem. The second Impressionist exhibition was held in 1876. Afterward, Renoir preferred to show his work at the Salon, and his painting Mme Charpentier and her Children (1878) won wide acclaim and cemented his standing as an artist.

In the 1880s he traveled to Algeria and Italy. He painted the German composer Wagner portrait in 1882.He also visited the English Channel islands, spending time in Guernsey where he painted over a dozen scenes of the ocean, bays, and landscape, particularly Moulin Huet in Saint Martin’s. On the hundredth year anniversary of Renoir's stay in Guernsey, a series of commemorative stamps were issued in 1983.

Pierre-Auguste Renoir married Aline Charigot in 1890, and the couple had three sons: Pierre, Jean, and Claude.