Uranus in the Twelfth House of the Natal Chart

What happens when Uranus is in 12th House? These people want to help others in times of need without letting them know about it.

The dreamy nature of the twelfth House fits in well with the independent desires of Uranus. Uranus encourages you to think differently. But you already have your head in the clouds. It is a match made in heaven, which can be a good thing or a bad thing.

Uranus symbolizes innovation, creativity, and rebellion and wants you to go against the norm to be true to yourself. The 12th House has issues with this, for you like helping others feel useful even in your marriage. This often means your happiness depends on other people. Because of your inability to rebel completely, you find other small ways to do this. Rather than directly helping someone, you set up a program that does it, for you or you offer opportunities to those less fortunate. 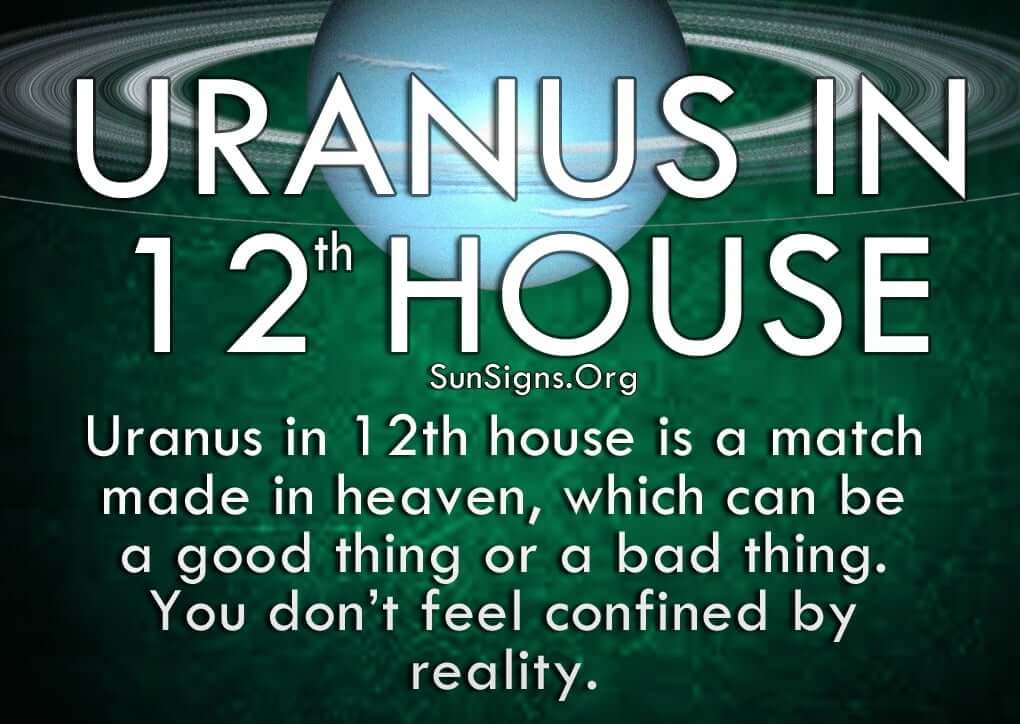 With Uranus in 12th House, you work behind the scenes to do things for others to avoid explaining why you do them. Your lack of confidence keeps you from doing anything unconventional, and Uranus makes you feel guilty for not having the guts to do what you want. But your caution is a good thing because it keeps you grounded in reality. Uranus could take over your fantasy world and keep you lost in it forever. Know your Uranus sign right away!

The best thing about Uranus in the twelfth house personality is that you don’t feel confined by reality. While some people are afraid to dream big, you look past the physical restrictions and try anything to make your wish come true. Because of this, you are unlimited to the kinds of jobs and careers you can do. Anything, where creative types and forward-thinking individuals surround you is a good place to start. And don’t be afraid to knock down any barriers you come across because that’s how innovations become a reality.

The one area you do need time to yourself is when you feel stressed and need to recharge your batteries. It’s better to have some alone time, for you can focus on what’s bringing you down and figure out ways to get over the feeling. Pulling strings behind the scenes can be tiring, especially if you don’t have anyone you trust to help you. While you constantly strive to make the world a better place to live, not just for others but also for you, you place a lot of pressure on yourself to match your dreams exactly.

But sometimes, you dream too big, and it’s not a realistic goal. That doesn’t mean you have to give up on it. You have to think about it differently. This is where Uranus can help because it offers a different path for you to explore and gives you the energy to explore it. This is where you can shine and not feel guilty about it.

In Astrology, Uranus is a unique planet that is different from all the planets in the way that it rotates around the sun. It revolves around its horizontal axis while all other planets rotate in their vertical axis. Uranus is a sign of great transitions and revolutions.

Uranus was discovered in 1781, and it is a generational planet. People who have Uranus in their birth chart tend to be revolutionaries who always advocate for change and a better tomorrow for everyone. It is a slow mover and takes decades in each of the Twelve Zodiac Signs.

Uranus in the 12th House Meaning

Is Uranus in 12th House good or bad? This placement reveals that you are someone with a strong intuition. Your intuition and subconscious send you messages that will help you navigate through life without any problems. Through your subconscious, you get dreams that guide you on the path to take in life.

Uranus in Twelfth House health need be a priority. In the Twelfth House, sleep is an important aspect of your wellbeing. Uranus urges you to take good care of your health. By resting enough, you give your body ample time to rejuvenate.

Uranus in the 12th House Astrology reveals that you easily absorb the energies around you. To avoid taking in negative energies, take time alone and rid yourself of outer influences that get the better of you at times.

Uranus in the Twelfth House and Your Freedom

Uranus in your natal chart signifies freedom. You feel freer when alone with no one to tell you what to do or where to go. Your true self comes out when you are on your own, away from people.

Once you’re able to take your ideas further than they’ve ever been before, you will build the confidence and momentum you need to go even further. Nothing will be able to stand in your way, not even those old pangs of self-doubt.

And if you have trouble at a particular point, stop and ask for help. Uranus in 12th house people have a huge social network who appreciate all that you do for them and are more than willing to bring you the rest of the way.