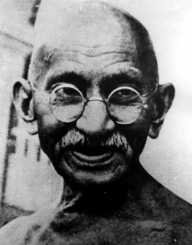 Mohandas Karamchand Gandhi was an Indian nationalist leader, who is more commonly known as Mahatma Gandhi. He was born in the year 1869 on October 2, in the town of Porbandar, in the Indian province of Kathiawar.

His father was one of the chief ministers in the town of their domicile and across the western states of the then British governed state of India. His mother was known to be a devout woman who was given to the ascetic life.

The Gandhi family was followers of Jainism, which was given to moral rigor. Their worship tied-in with Hinduism and they were committed to meditation, non-violence, fasting and the vegetarian life.

After his father passed away in the year, 1885, Gandhi sailed away to London so that he could study to become a lawyer. This was against his earlier love of becoming a medical doctor. In England, he battled with the cultural shock as an 18-year-old.

He lived in London for the next three years and stayed a vegetarian. He became the executive of the London Vegetarian Society while devoting his time to studying the sacred texts of world religions.


Loss of his Mother

Mahatma Gandhi lost his mother three weeks after his return to India in the year 1891. He did not get his footing in India to practice law and in his first courtroom case; he went blank when he was to take his turn to cross-examine the witness.

He refunded his client’s money thereafter and eventually got a year’s contract to work in South Africa as a lawyer. He set sail for Durban in the South African east coastal state of Natal by 1893. He just witnessed the birth of another son at this time by his wife.

Mahatma Gandhi’s seminal moment came on his trip to Pretoria on a South African wintry day, 7th June 1893. A white man objected to his seating at the first class coach and he refused to budge to give up the seat since he was holding a ticket. This led to his forcible removal from the train in the town of Pietermaritzburg.

In 1894, he roused other like minds to form the Natal Indian Congress as a vehicle to combat discrimination. As his tour of duty ended in Natal, he learned at his farewell party that Indians were to be deprived the right to vote via a bill before parliament.

He stayed on in Durban to draw international attention and fight the passage of the bill. Eventually, he did not succeed but he listened to the prodding by other immigrants to fight the bill.

Mahatma Gandhi was away in India till 1897 when he returned to South Africa after the brief trip. His two children and wife made the journey with him, this time. He ran a thriving practice in the legal profession till the outbreak of the Boer War.

Gandhi was reputed to have raised a volunteer force of 1,100 Indians in the ambulance corps. They aided the British during the Boer insurrection on the premise that with the rights of citizenship there are responsibilities. His study of the religions of the world got keener while in South Africa. This was how he gravitated towards celibacy and an ascetic life.

Mahatma Gandhi led his first mass movement in 1906, to protest the restriction of the rights of Indians by the Transvaal regional government. Part of the grouse was the failure by the government to recognize marriages contracted under Hindu terms. He called it the march of “Truth and Fairness” or the “Satyagraha”.

The government responded by imprisoning Indians in the year 1913 alongside Gandhi. A compromise was later reached between General Jan Christiaan Smuts for government and Gandhi, for the Hindus. Hindu marriages became recognized and the poll tax levied on Indians was abolished.

When Gandhi sailed away from South Africa to return home to India, Jan Smuts declared “the saint has left our shores...”

After Mahatma Gandhi returned to his native India on January 9th, 1915, he hauled himself into the fight for Independence from British rule. He fought for the rights of women, poverty reduction and religious tolerance.

The end of the 1920s was a tumultuous one for the British colonial rule in India with the introduction of constitution reforms. The committee was set up with no Indian representative and this infuriated the Mahatma.

In 1928, he pushed a resolution through the Calcutta Congress in the month of December for a full Indian dominion. The Sir John Simon led administration did not budge and this led to the declaration of Indian independence in December 1929 with the hoisting of the Indian flag.

This was to signal the beginning of the journey to formal independence from Britain as Gandhi mobilized his countrymen and women to pledge to civil disobedience. In March of 1930, he led the Salt March to rebel against British regulation of trade in salt.

The protest he led, covered 241 miles up to Dandi, from Ahmedabad. This march to Gujarat was all about making salt and taking control of the mining of salt from the British overlords. The ordinary Indian, he declared; should be free to mine salt without any legislation by the British. He was arrested along with other followers that were reputed to be about 60,000.

After he was released, he did not stop to fight for the independence of his country and this became formal in 1947.

Mohandas Karamchand Gandhi got a wife based on traditional terms when he was just 13 years old. He wedded Kasturbai Makhanji Kapadia, who was 14 years of age in 1883 and in the month of May. This was an arranged marriage as he could not have settled for marriage at this age.

He had five children through the union but the eldest died in infancy. His wife was also a social activist, who bought into the vision of Mahatma for social justice and quality.