Uranus in the Fourth House of the Natal Chart

What does Uranus in 4th House mean? These people are their own bosses yet listen to their loved ones.

4th House Also Known As House Of Family And Home

You feel an inner conflict with Uranus in the Fourth House because you want to take care of people but not at the expense of your happiness. You have a strong desire to do your own thing while at the same time longing to be a nurturing parent and partner.

Uranus deals with unconventional thinking, innovation, and rebellion. The fourth House ruled by Cancer zodiac sign is usually the caregiver and homemaker, but planet Uranus makes you want to change your tune and be more independent in your career.

You are still a very giving person, but not everything centers around your friends or family. You want to keep some things for yourself and be free to express yourself; however, you want. 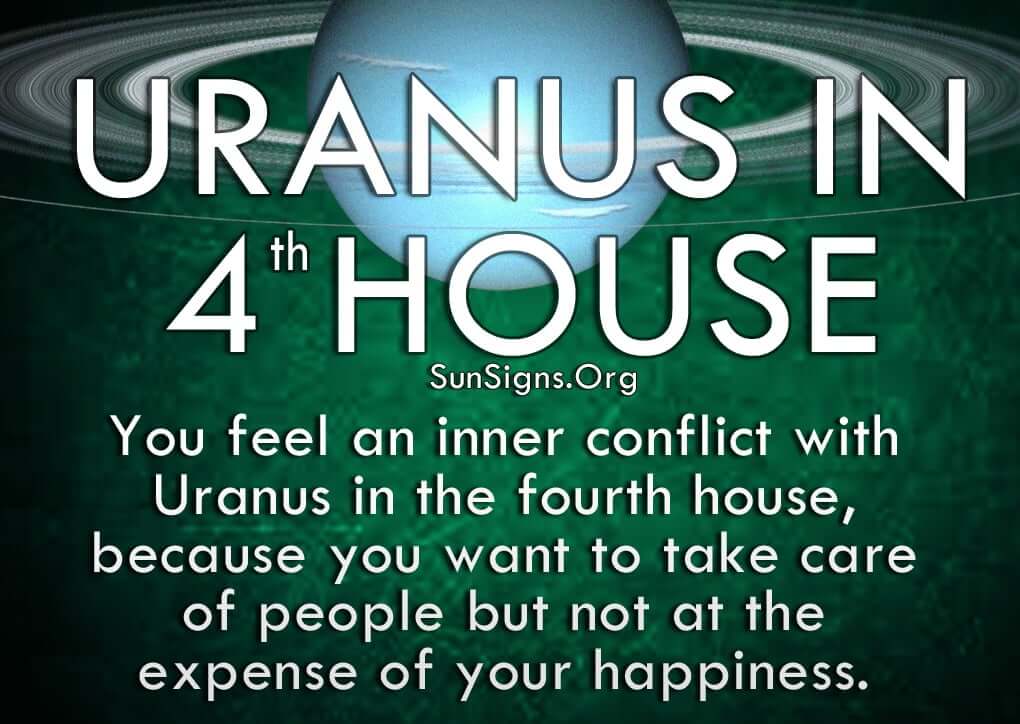 Everyone close to the Uranus in 4th house personality understands the struggle you experience between taking care of your family and yourself. Use their understanding to your advantage and have them help out with household duties and other responsibilities.

If the pressure is taken off of your shoulders, even just a tiny bit, it will feel like whole worlds have been lifted from your back. This will allow you to explore all the things you want to do and give you plenty of time to return to your family and reconnect at the end of the day.

Due to the Uranus in fourth house effects, you’ll be able to maintain a sense of balance, which will also help you keep your emotions in check. And you can have a happy marriage that you need to relax and unwind from the stresses of the day.

Sometimes people with Uranus in the 4th House find themselves going off on their own to have some quiet time with their thoughts. You need peace to figure out what you want in life, outside of your close social network. You despise chaos, and this is the best way you can clear your mind and clear your life of useless clutter.

But this can make you feel guilty every once in a while because you don’t want to let those closest to you down in any way. They are still the most important people in your life, and you need them to know that. One thing that can color your perspective on nurturing is the way you perceive your childhood. If you felt like you weren’t given a lot of emotional encouragement in your youth, this can spill over into your parenting style.

This causes some internal conflicts, especially if your partner doesn’t agree with some of your choices. And this may not be a conscious choice either. You don’t always recognize the things from your past that influence your present decisions.

Uranus is a planet of originality. In astrology, it is a generational planet that spends seven years in each of the zodiac signs. It brings rapid changes into your life and is always leading you towards a better future. It rules the disciplines of Science, Engineering, and Technology. Uranus natives are scientists, innovators, engineers, and intellectuals.

Uranus is an outer planet that makes you unique. With its influence on your life, you are capable of exercising personal freedom in your life. Natural disasters are also connected to Uranus in astrology.

Uranus in the 4th House Meaning

What is the importance of Uranus in the 4th House? This placement brings positive transformations into your personal life. Things work out for the better because of your determination and eagerness to live and have a good life.

Uranus in Fourth House careers take a turn for the better when you work on them. The efforts you put in all you do come from the positive influence of Uranus in your life. This placement makes you independent and self-reliant, but you need to understand that you need others to help you become better at times.

Uranus in the Fourth House and Your Home

With Uranus in 4th House, many changes will take place in your home. You grew up in a chaotic environment, but it is upon you to turn the tables and achieve stability and peace in your home. You tend to change residences often because you are not comfortable being in one place for long.

The Uranus in 4th house astrology asks you to try to be cognizant of why you think and do the things you do to better understand what you might want to change. Having more self-awareness will help to get rid of some of the guilt brought on by unforeseen circumstances.

You can be better prepared to handle whatever comes your way if you understand the motivation behind your reactions. You tend to be overemotional and melodramatic, and people sometimes have trouble taking you seriously because of it.

Don’t let your Uranus sign continue to mess with your comfort zone. Find what works for you and stick with it. You really can have it all – it just takes time, effort, and a little confidence.