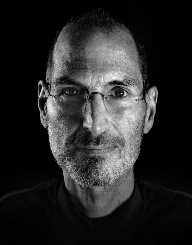 Steve Jobs was born on February 24th, 1955 in California, San Francisco, United States. Her parents were from the University of Wisconsin and that they had given him up for adoption. Before inventing the Apple Computer, he had tried out several pursuits in his career life. The evolution of modern technology was taken over by Apple’s products which hit the market in 1976. Some of the products that hit the market include iPhone, iPad, and iPod. Jobs had pancreatic cancer which led to his early death in 2011.

Steve Jobs was born on February 24th, 1955. He was an adopted son of Paul Reinhold and Clara Jobs. His biological parents were Abdulfattah Jandali and Joanne Carole Schieble. The couple could not raise Jobs as their parents had rejected their affair. Jandali, his biological father, worked as a science professor while his mother Schieble was a speech therapist. After Jobs was given up for adoption, his biological parents later got married together and had another child named Mona Simpson. Jobs found out then about the real information regarding his birth parents when he was 27 years.

Clara and Paul Jobs were the adopted parents to Steve Jobs. Paul, his father, was a mechanism and had experience working as a Coast Guard. On the other hand, Clara was an accountant. Young Steve Jobs got exposed to his father’s job as a mechanic as they both worked on electronics. Jobs would spend hours working on electronic devices. This experience gave him mechanic skills which would later come handy in the development of his career.

In school, Jobs got quickly bored with the formal education that he went through. While at his fourth grade, his teacher had to bribe him-him to study. His intelligence amazed the administrators and that they wanted to send Jobs ahead to high school. This was firmly rejected by his parents.

For his high school education, Steve Jobs attended Homestead High School. This was where he first met his partner to be Steve Wozniak. During this time, Wozniak was ahead of him as he was studying at the University of California. The two clicked together as they shared similar interests more so in the world of electronics.

After graduating from high school, Steve Jobs went to Reed College in Portland. It seemed as though this was not his thing and he later dropped out of college after spending only six months.

In the early 1970s, Jobs was hired as a video game designer by Atari. He did not last long in this company as he left after a few months. Jobs later went to India with the primary goal of seeking for spiritual enlightenment. In 1976, Jobs partnered with Steve Wozniak, and they established Apple Computers.  Jobs was only 21 years while making this huge step in his life. They carried out their operations in the family garage where Jobs used to live. Both had to sell their properties to raise money for the project.

The computer industry changed with the innovations that Jobs and Wozniak were releasing into the market. They made computers easily accessible to ordinary people. Apple as a company at first sold their computers for 666 dollars apiece. The first model of the firm gave the company colossal revenue approximately $774,000. Apple II was their next brand in the market. Their sales were higher than before as they got revenue of over $139 million.

In 1980, the Apple Company was valued at $1.2 billion. Steve Jobs hired John Sculley to act as the new CEO of Apple.

Despite the success that Apple had achieved within a short period, the coming years were difficult for the company. This is because there were design flaws that left consumers disappointed. Rival companies such as IBM outshined Apple regarding sales. After releasing Macintosh in 1984, this brand was seen as superior to IBM’s PCs. The only problem was that it was not compatible with IBM. This made Sculley conclude that Jobs was only taking Apple down.

Sculley later came up with a board meeting that was meant to drive away Jobs out of his essential role in the company. They wanted him to focus on new product development in the business. This position would give Jobs no power to the organization. Confrontations with Sculley made Jobs leave Apple, later on, to start his own NeXT computer in 1985. Having no money to run the company, he pulled in funds from billionaire Ross Perot. They argued that his new company was to be his first comeback to the PC world.

A year later, Jobs bought Pixar Animation Studios from George Lucas. Steve Jobs believed in the company’s potential, and he went ahead to invest $50 million in it. Fortunately, his efforts bore fruits as the company later released hit movies such as Finding Nemo, Toy Story, The Incredibles, etc. Collectively, this new group earned over 4 billion dollars. In 2006, Pixar studios merged with Walt Disney in 2006. As a result of the merger, Jobs became the largest shareholder.

In 1997, Steve Jobs returned to Apple. This was after he had sold his company NeXT to Apple Company the previous year. He brought numerous changes during the 90s as he came up with unique products such as iMac and other products that eventually earned the company trust from customers out there. Products that attracted a large pool of market were the iPhone, iPod and MacBook Air. These products revolutionized the world of technology.

In 1978, Steve Jobs had a child with his girlfriend Chrisann Brennan after which he declined to be the paternal father. Later on, when Jobs was financially stable, he accepted his daughter Lisa back to his life.

During the 90s, Jobs met Laurene Powell while taking his MBA at Stanford school of business. The two got married a year later and had three children together, Reed, Erin and Eve.

Jobs had pancreatic cancer which was diagnosed in 2003. His health worsened as a result of the disease and later died on October 5th, 2011.