How good or bad is the love compatibility between a Scorpio and Aries emotionally, mentally and sexually? Read on…

The Scorpio and Aries in love will wonder what they did before they met each other. They both adore power and they both will be able to accomplish anything. However they both have to learn to share being the center of attention. Scorpio is very focused. Once they decide they want the ram, Aries will likely find it impossible to say no. The Scorpio zodiac sign will have a deeper and more complex loyalty to the relationship than the Arian will.

Because Mars symbolizes passion, Scorpio and Aries soul mates can have a very enthusiastic time together. This will extend to their physical relationship and their everyday relationship. Disagreements will be typical in a relationship that is very challenge focused. However, they will both be excited about making up. Pluto will add more intensity to this Scorpio Aries relationship.

Scorpio is a Water sign and Aries is a Fire sign. Water and fire elements can be very good together if they work together. They will be able to mix emotion and physical action so that they can get things done. Scorpions will be a good strategist. They will help the Arians plan battles before they just jump into them. Both will be able to learn from each other.

In this Scorpio Aries compatibility, they will learn to let go and move on when their efforts are stopped. Water has the ability to put out Fire. The scorpion’s emotional manipulation will affect the ram in this way. Scorpio will hurt Aries’ excitement. At the same time, too much Fire can boil Water away. The scorpion feeling emotional stress might become vindictive. Scorpio and Aries couple will have to learn to work together instead of against each other.

Scorpio is a Fixed sign and Aries is a Cardinal sign. Scorpio can learn how to be impulsive from the Aries star sign. The ram can teach them how to do things just to experience them instead of being concerned with having a purpose. Scorpio can teach Aries stability and how to finish projects before jumping into a new one while there is still another to complete. 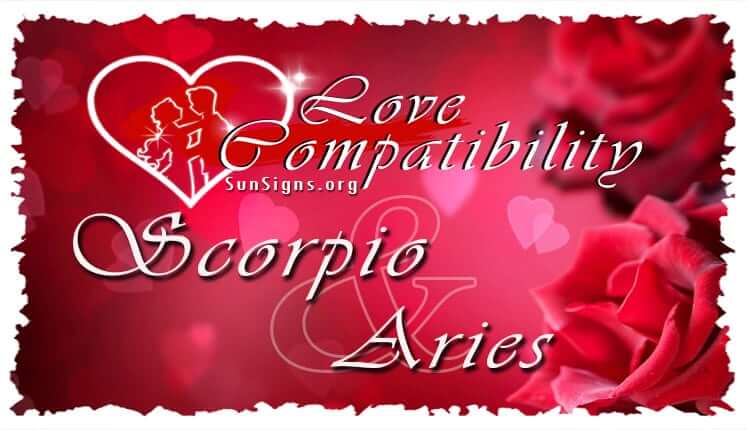 The best thing about Scorpio and Aries compatibility in a romantic relationship is the power of their combined traits. They are both winners and they will not give up. Scorpio and Aries friendship will be one that never settles for anything less than the best.

The Scorpio and Aries relationship is electric and passionate. They would do anything for each other. However, if their relationship does not work, they might almost kill each other in the fall out of it. The scorpion and the ram will have a roller coaster ride of horoscope compatibility.

They will go from the highest point of ecstasy to the deepest point of despair and back again at an amazing speed. Scorpio is the best known zodiac for their physical passion. The ram being compatible will rely on being physically compatible. The Scorpio Aries sexual relationship in bed will typically have a lot of desire and passion in every area.

When life is going well for them, the scorpion and the ram can have a successful love relationship. They are both obviously attracted to each other and they are both very passionate. They are both fascinated with each other’s natures. The scorpion is a water sign. They can help ground temperamental Aries. They will be able to help the ram use their instincts in their spontaneity and make better decisions.

Aries is a fire sign. They will be able to persuade the Scorpio personality to leave their deep water. The ram can get the scorpion into a lot of excitement and adventure. They are both highly motivated to get what they want. When they decide to work together towards a common goal, they will make a very good team. Scorpio and Aries marriage will have a lot of compatibility for achieving things in life. They can be especially successful if the ram will listen to the scorpion’s strategy expertise.

The Scorpio and Aries love compatibility will be likely to have deep, heated disagreements. They will have a very intense and usually argumentative bond. Both star signs will be envious. The scorpion will likely be more patient but they will be more clingy. They can easily snap at their partner when their feelings are hurt. They will both have differences in emotional investment.

However, they both adore taking chances and being daring. They will not have a dull relationship. They will be more than capable of having adventures together. They might have issues understanding each other. The Aries man or Aries woman is very outgoing, straightforward, and open. The Scorpio man or Scorpio woman is more reserved, emotional, and sometimes manipulative. Scorpio and Aries in love might have to make a truce sometimes to keep the relationship peaceful.

Both Scorpio and Aries are ruled by Mars. The planet Pluto will rule over Scorpio. Mars is the planet of passion and war. Pluto is the planet of power and destruction. When Mars and Pluto meet, they will have fights over control.

The scorpion and the ram will not always have compatibility that is direct. They will have trouble when they have stress. If there is emotional pressure, Scorpio and Aries compatibility will likely fall apart. The scorpion will be stubborn, withdrawn and will resort to emotional manipulation. Aries will get loud. They will scream, shout, and have tantrums.

The dignified scorpion will not like this. Their relationship will have a lot of heavy, intense fights. There will be an atmosphere of emotional destruction. Scorpio and Aries can easily hurt each other very badly if they try. When they fight, they will try.

Both the scorpion and the ram will have envious feelings. Scorpio will get tired of the drama and they will eventually be the one to end the relationship. Aries will need to remember that Scorpio is vindictive. The scorpion is not likely to forgive or forget even after the Scorpio Aries breakup.

There is potential for Scorpio and Aries to have a successful relationship. Their relationship will be complex and not everyone will understand them. They will be extremely devoted to each other and very protective. They might work well together if their careers keep them apart for extended amounts of time or if they live apart. Passion and their emotions when they have a reunion will be enough to keep their negative qualities from being expressed in this Scorpio Aries compatibility.