What Is Synastry – Relationship Astrology?

Many people turn to astrology to provide solutions or answers in life and one of the biggest concerns for many is their personal relationships.

Synastry is a specific area of astrology which is to do with how individuals react with one another.

In the same way a fortune teller will predict the status of current and future relationships, the synastry or relationship astrologer deals with interactions between people.

The branch of astrology is based on the fact that everyone has a birth chart when they are born. Essentially this is based on the notion that when a baby is born the heavens or planets to be exact, have certain alignments at the point in time. It is believed by some especially astrologists that this has a major impact on a person’s life ahead. The reason for this is that the planets have influenced the baby when born according to the relative positions of the planets in the sky.

Given that each individual is supposed to have 10 planets and moon in our chart, with each having different signs, house and aspect to another individual, relationships and interactions between two people can be very complex indeed, hence the fiery and passionate dynamics between certain individuals! 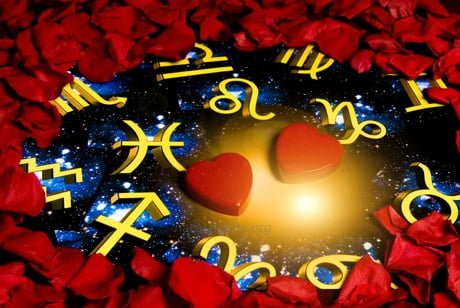 1) Based on the unique attributes of individual charts, a compatibility score of two people can be calculated. Whilst it is too complicated to explain here it is based on the number of planets that are in each of the elements at birth (water, air, fire and earth). If the most planets were in the fire element at birth followed by earth, the person would be a fire-earth personality.

This is then compared to a partner or another person who will have a different element composition. Certain combinations of element personalities suit one another, others don’t just as is supposed to be the case with zodiac signs.

2) House overlays are complex graphical circular charts that predict how two individuals will relate to one another, view one another and what aspects of their relationship will be most dominant and what issues they will have and potentially how to overcome them.

3) Relationship potential is another aspect. This not only refers to the potential for the relationship succeeding but also how the relationship occurs in the first place. It delves into almost Jungian psychology referring to projection and the subconscious and how we often are attracted to and attract the opposite, people who display either traits that we have repressed, rejected or are perhaps only subconsciously aware of in our innermost being.

4) The chart of the first meeting is literally that, a chart that analyses when the couple or two individuals first met. Specifically it supposedly then explain what the two people want and expect out of the relationship by referring to the position of the planets at the time and their various influences on the couple. The position of the Sun especially will also shed further information on the nature of their future relationship together.

5) Soulmate astrology is perhaps the most popular aspect of Synastry. Everyone wants to find their ultimate soul mate.

With Synastry astrology the relative Ascendants of the two people is important as is the Moon positions which are said to reflect involvement in past lives via reincarnation.

So there we have it, a type of astrology specifically dedicated to understanding past, present and future relationships.