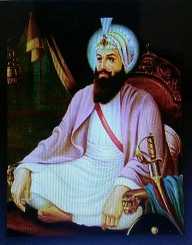 He became Guru Har Rai when he was 14 years old. His grandfather, Guru Hargobind, was the sixth Sikh leader. Guru Har Rai became the seventh of ten Gurus of Sikhism. He was nominated by his grandfather just before his death. There were two influences of the Sikhs – one was a moderate influence, called Sufi, led by Dara Shikoh. The other was a conservative influence, called Sunni, led by Aurangzeb. Dara and Aurangzeb were brothers, and fought for power. Guru Har Rai sided with the Sufi, but it was the Sunni that won the war.

When the Sunni won, Aurangzeb had his brother killed, and then called upon Guru Har Rai to explain why he had sided with the Sufi. Guru Har Rai sent his eldest son, Ram Rai, as his representative, but the boy was taken captive by Aurangzeb.

Aurangzeb argued with Ram Rai about a verse from the Sikh’s holy text that he believed was biased against Muslims. Instead of standing up for his heritage and the holy text, Ram Rai changed it to make Aurangzeb happy. This made Guru Har Rai very unhappy, to the point where he named his younger son to succeed him.

Guru Har Rai was heavily involved in missionary work. He travelled throughout India, converting many people to Sikhism. He was also responsible for some of the singing traditions of the scriptures. He began the katha (discourse style recitals), and also the sabad kirtan. The jotian da kirtan was also thanks to Guru Har Rai. Guru Har Rai also had the challenge of maintaining unity within the Sikh party, as his older brother continued to cause problems over the years, trying to split the Sikh movement. Guru Har Rai reigned for 14 years, he died at the age of 31. His younger son, Har Krishan, became the eighth Guru.

He also managed to keep the Sikh’s united, which was a difficult task at best.