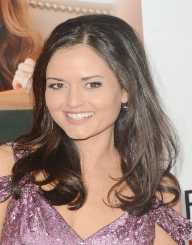 Danica McKellar is an actress and a writer. She is also an advocate for education.

Danica Mae McKellar was born on 3rd on January 3, 1975, to Christopher and Mahaila. She was born in La Jolla, California and moved to Los Angeles when she was eight. Danica has an older sister Crystal, and stepbrothers Chris Junior and Connor.

Her mother was an actress before her children were born, after which she became a full-time mother.

Danica McKellar and her sister had professional acting careers when they were young. She attended weekend acting classes for children at the Lee Strasberg Institute in L. A. when she was 7.

She went on to play Gwendolyn “Winnie” Cooper in The Wonder Years, which ran from 1988 to 1993. She appeared in other minor roles after, before landing a significant role was as Elsie Snuffin in The West Wing.

Initially, Danica McKellar studied screenwriting and directing at UCLA's film school, while taking Multivariable Calculus to challenge herself. She found her passion and future in Mathematics and switched studies soon after.

Danica Mc Kellar co-authored a paper with her professor; the mathematical research paper was published in Journal of Physics and the New York Times. The resulting theorem now bears her name, the Chayes-McKellar-Winn Theorem.

Acting as Winnie Cooper propelled her to certain fame, but Danica had problems transitioning to adult acting roles. After The Wonder Years and The West Wing, she had guest roles in television series such as How I Met Your Mother, Working, Heatstroke and more.

Recently, Danica McKellar starred as Inspector Mom, and then The Quail in Project Mc2. Danica was in the Wedding Bells. To date, Danica acted in twentyone films and sixty-one roles in television series and six voiceovers in video games.

Danica McKellar appeared as Gwendolyn Cooper in Avril Lavigne’s Rock and Roll music video; and was featured in Debbie Gibson’s No More Rhyme in 1989, playing the cello at the beginning of the video.

Danica McKellar wrote four mathematical books, aiming at adolescent females, in a bid to make maths more accessible to girls. Her books are seen to be a guide to help girls understand mathematics and using real life examples to help make it more glamourous.

Danica McKellar was awarded the Joint Policy Board for Mathematics (JPBM) Communications Award In  2014, it was to commend her effort in encouraging middle and high school students, particularly girls, to be more interested in mathematics.

Danica McKellar was engaged to boyfriend Scoot Sveslosky in 2014, and they were married in Kaua'i, Hawai'i in November.