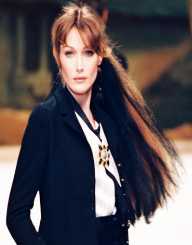 Carla Bruni was born on December 23, 1967, in Turin, Italy. Her parents are Marisa Borini and Maurizio Remmert. However, she was primarily raised by her mother and Alberto Bruni Tedeschi.  Her siblings are Valeria and Virginio Bruni Tedeschi.

As a young lady, Carla Bruni attended a Swedish boarding school. She later went on to study in Paris at the Sorbonne for her college education. However, she later dropped out of college to pursue modeling full time.

Carla Bruni began working as a professional model in the late 1980’s. It wasn’t long before she was noticed by Paul Marciano, a higher-up employee at Guess. Soon, Bruni began modeling for his company.

The 1990’s were some of Bruni’s most productive years as a model. Carla Bruni modeled for various high-paying brand-name companies, including Chanel, Versace, and Christian Dior. During this decade, she appeared on the cover of over 100 magazines.

In 1997, Carla Bruni started a music career. When she began her music career, she took a retired from her modeling career, so she did not have to do both at the same time. However, it was not until 2002 that she finally released her first album, Quelqu’un m’a dit. This album was extremely popular in France, and relatively popular in surrounding countries.

In the following years, Carla Bruni wrote several songs for other musical artists, but she did not release her second album until 2007. This album was called No Promises. It was unusual in the way that the song lyrics were all from famous poems which were then set to music. This odd experiment made the album much less successful than her first album.

In 2008, she released another album, Comme si de rien n’tait. She returned to writing her own songs for this album. This almost rated better than her previous albums. Her most recent album, Little French Songs, was released in 2013. This album did just as well as her first album.

Carla Bruni has recently stepped into working in film. In 2011, she appeared in her first film role, as a museum guide in Midnight in Paris.

Even though she has not been in many films, many of her songs have been in both English-speaking and foreign films and television shows. Some of the shows and films that her songs have appeared in include The Divorce, The Lake House, 500 Days of Summer, The Boys are Back, Puzzled Love, Chuck, 5 to 7, and Ventoux.

Carla Bruni has been awarded a couple of prestigious awards for her various careers. Her awards are listed below.

Even though Bruni has only been in one film so far, (Midnight in Paris) Carla Bruni already has two film award nominations. These include the Screen Actors Guild Award for Outstanding Performance by a Cast in a Motion Picture and the Phoenix Film Critics Society Awards for Best Ensemble Acting.

Carla Bruni married Nicolas Sarkozy in 2008. This couple has one child together: Giulia Sarkozy. Before her marriage, she also had a child with her ex-boyfriend Raphael Enthoven: Aurelien Enthoven.