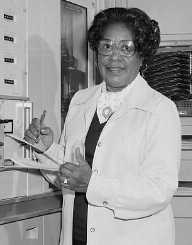 Mary Winston Jackson was an African –American aerospace engineer and mathematics. Born on April 9, 1921, she became the first black female engineer at NASA in 1958. Winston-Jackson worked at the National Advisory Committee for Aeronautics (NACA), which became National Aeronautics and Space Administration (NASA) in 1958. She spent most of her career at Langley Research Centre in Hampton, Virginia. At the latter part of her career, she became the manager of Federal Women’s Program, in the NASA Office of Equal Opportunity Programs, and of the Affirmative Action Program. As a manager, she influenced the hiring and promotion of women in the science, mathematics, and engineering field of NASA.

Mary Winston-Jackson was born to Ella (nee Scott) and Frank Winston on April 9, 1921, in Hampton Virginia. Growing up in Hampton, Virginia, she received education at the all-black George P. Phenix Training School. After graduating with highest honors, she enrolled at Hampton University. In 1943, she graduated with bachelor’s degrees in physical science and mathematics. Winston joined the Alpha Kappa Alpha fraternity.

Following her graduation from Hampton University, Mary Winston served as a mathematics teacher at an Africa-American school in Calvert County, Maryland. She spent a year there. During this period, she was also teaching high school and college students.

After returning to Hampton in 1943, she worked as a bookkeeper at the National Catholic Community Centre. Subsequently, she became a receptionist and clerk at the Health Department of the Hampton Institute. Following a brief leave to give birth to her first child, Jackson worked at the Office of the Chief Army Field Forces at Fort Monroe as a clerk in 1951.

Winston Jackson joined the National Advisory Committee for Aeronautics (NACA) in 1951. NACA later became National Aeronautics and Space Administration (NASA) in 1958. At NACA, Jackson served under Dorothy Vaughan in the segregated West Area Computing Section. She worked as a research mathematician (computer) at the Langley Research Centre in Hampton, Virginia.

Subsequently, she moved to work for engineer Kazimierz Czarnecki in the Supersonic Pressure Tunnel in 1953. On the advice of Czarnecki, Jackson sought further training to earn a promotion to an engineer. As a result, she took night graduate-level courses in physics and mathematics offered by the University of Virginia.

Since classes were held at the all-white Hampton High School, Jackson needed to petition the City of Hampton to enable her to attend the classes.

Following the course, she earned a promotion as an aerospace engineer in 1958. She, therefore, became the first black female engineer at NASA. Her duties included analyzing data from wind tunnel experiments and real-world aircraft flight experiments at the Theoretical Aerodynamics Branch of the Subsonic-Transonic Aerodynamics Division at Langley. This was aimed at understating the flow of air, including drag and thrust force to develop United States planes.

During her career with NACA and NASA, she wrote and co-wrote 12 technical papers. She was able to achieve the most senior title within the engineering department in 1979. However, she later willingly accepted a demotion to become an administrator in the Equal Opportunity Specialist field. At this position, she helped women and other minorities to achieve their career goals and promotion. She became the manager of the Federal Women’s Program in the Office of Equal Opportunity Programs and the Affirmative Action Program. Jackson retired from NASA in 1985.

The film Hidden Figures, 2016 highlights the careers of Jackson and others like Dorothy Vaughan and Katherine Johnson. In 2018, the Jackson Elementary School in Salt Lake City was renamed after Mary Jackson. She received the Apollo Group Achievement Award in 1969 and Langley Research Center Outstanding Volunteer Award, 1975.

Mary Winston was married to Levi Jackson Sr. The couple had two children: Levi Jackson Jr. and Carolyn Marie Lewis. Winston-Jackson served as a Girls Scout leader for over 30 years. She breathed her last breath on February 11, 2005, at Riverside Convalescent Home in Hampton. She was 83.