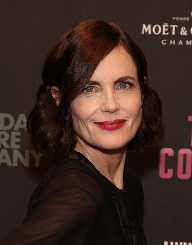 American actor and entertainer Elizabeth McGovern was born on the 18 July 1961 in Evanston, Illinois to Katharine Watts, a high school teacher, and William McGovern, an academic and law professor. McGovern spent some of her childhood in Evanston before the family relocated to Los Angeles because of her academic career.

Elizabeth McGovern was a pupil at North Hollywood High and graduated from The Oakwood School. McGovern also trained at the American Conservatory Theatre in San Francisco and The Juilliard School in New York.

McGovern came to attention when she had a role in the award winning film Ordinary People (1980) which was directed by Robert Redford and starred Donald Sutherland and Mary-Tyler Moore.

McGovern started acting in various stage roles. McGovern was also nominated for a Best Supporting Actress Oscar for her role in Ragtime (1981). Other films McGovern appeared in include Lovesick (1983) a comedy with Dudley Moore. Once Upon a Time in America (1984) alongside Robert De Niro. Racing with the Moon (1984) with Sean Penn and Nicolas Cage. The Handmaid’s Tale (1990) and The Wings of the Dove (1997). McGovern also starred with Dudley Moore in Lovesick. McGovern played the part of matriarch Cora Crawley, the Countess of Grantham in the British television series Downton Abbey, a historical period drama set in England (2010-2015).