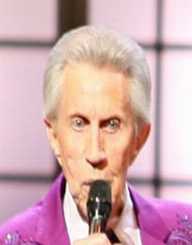 Porter Wagoner’s music career began somewhere around the beginning of the 1950’s. Porter Wagoner first started to play his songs on local radio stations, but it wasn’t until 1955 that he signed on with RCA Records. He released his first album, Satisfied Mind, with this record company in 1956. Porter Wagoner began singing at the Grand ‘Ole Opry in 1957, which had been a lifetime goal for Wagoner.

One of Wagoner’s biggest claims to fame is his promoting of the singer Dolly Parton. He more or less introduced her to the music world in the late-1960’s. At this time, she performed duets with Wagoner. Later on, once Parton had claimed her own stake in fame, she left to pursue a career of her own. Some of Wagoner’s most popular albums from his decade include Y’All Come, Porter Wagoner in Person, Confessions of a Broken Man, The Cold Hard Facts of Life, and The Carroll County Accident.

Porter Wagoner kept busy in the 1970’s, producing about two albums a year. Most all of his albums from this decade ranked in the top 50 in the US Country charts. One of his albums, You Got-ta Have a License, even ranked in the top ten. Some of his most popular albums from this decade include Simple as I am, Tore Down, Highway Headin’ South, Ballads of Love, and Porter Wagoner Sings His Own.

In 1981, Porter Wagoner left RCA Records and signed on with Kaola Records. In this same year, he released two albums with this company: A Fool Like Me and Not a Cloud in the Sky. He released two other albums in this decade with other record companies: Viva Porter Wagoner (Warner Bros./Vista Records) and Sorrow on the Rocks (MCA Records).

After the 1980’s, Porter Wagoner didn’t produce another studio album until 2000, when he signed on with Shell Point. He released two albums with this company: The Best I’ve Ever Been and Unplugged. In 2003, he signed on with TeeVee Records. With this group, he released five more albums, including Something to Brag About and The Versatile.

In 2007, he was picked up with ANTI Records. He only released on record with this company, Wagonmaster, before his death. This would later become one of Wagoner’s best-selling albums.

In 1960, Porter Wagoner starred in his own talked show, The Porter Wagoner Show. He hosted this show remained on air until 1981, making it one of the longest-running syndicated shows to be shot out of Nashville.

In 1982, Porter Wagoner had a small role in the film Honkytonk Man as the character Dusty. He also later appeared in the film Paradise Park in 1991 as a governor. Over the course of his music career, he also appeared in several country music documentaries, talk shows, live recorded performances, and other shows in which he simply appeared as himself.

Over the course of Wagoner’s long career as a singer, he has won a dozen awards. Some of his most impressive awards listed below.

Porter Wagoner was first married to Velma Johnson in 1943. However, they broke off the marriage in the same year. He later married Ruth Williams in 1946. However, this couple divorced in 1986. Wagoner has three children: Debra, Denise, and Richard.

Porter Wagoner died on October 28, 2007, in Nashville, Tennessee, USA. His cause of death was lung cancer. He was 80 years old when he passed away.