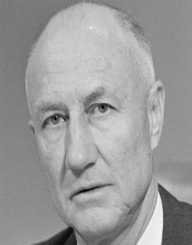 James Strom Thurmond Sr. was an American politician. Born on December 5, 1902, he served as a US Senator from South Carolina for 48 years. He was first voted to the Senate in 1954 as a member of the Democratic Party and from 1964 as a member of the Republican Party serving until 2003. In 1948, Thurmond contested for president in the ticket of the States Rights Democratic Party but received 2.8% popular votes and 39 electoral votes.

He was the oldest and longest-serving member of Congress to serve solely in the Senate and the only member of either chamber of Congress to pass 100 years while in office. He was also the longest-serving Republican Senator in U.S. history. Thurmond was a proponent of segregation and a staunch opponent of the Civil Rights Act of 1957. For his stance, he conducted the longest filibuster by a single senator, lasting 24 hours and 18 minutes nonstop. He was against the civil rights legislation of 1964 and 1965, which aimed to end segregation and protect the civil rights of African-Americans.

James Strom Thurmond Sr. was born on December 5, 1902, in Edgefield, South Carolina to Eleanor Gertrude and John William Thurmond. His father was a lawyer. He is of an English and German ancestry. The Thurmond’s home received several visitors including congressmen, senators, and judges who were friends of James. Hence, young Thurmond was exposed to such personalities.

He received education at Clemson Agricultural College of South Carolina (currently Clemson University). He was a member of the Pi Kappa Alpha fraternity and graduated with a degree in horticulture in 1923.

After his graduation, Strom Thurmond worked as an athletic coach, teacher, and farmer. In 1929, he earned an appointment as superintendent of education at Edgefield County, where he served until 1933. He later joined his father in his law practice, serving as an apprentice. In 1930, he was admitted to the South Carolina bar. In 1930, he was appointed the Edgefield Town and County attorney, where he worked until 1938. He was then appointed circuit judge serving until 1941.

Strom Thurmond was elected to the South Carolina Senate as a representative from Edgefield in 1933. He supported the 1932 presidential campaign of Franklin D. Roosevelt. In 1942, Thurmond resigned from the bench to join the US army during World War II. He rose to the rank of lieutenant colonel and received several decorations for his military exploit.

In 1946, Thurmond ran as a Democrat and was elected governor of South Carolina. He was voted chairman of the Southern Governors Conference on November 22, 1949. In 1948, he contested for president on the ticket of the States’ Right Democratic Party (known as the Dixiecrats). He received just 39 electoral votes.

In 1954, Strom Thurmond contested for the US Senator from South Carolina as a write-in candidate and won becoming the first person to win elections to the US Senate as a write-in candidate against a ballot-listed opponent. In 1956, he resigned to contest in the Democratic Party’s primary, which he won. He was since elected to the US Senate for 46 years. As a Senator, Thurmond gradually established himself as a Southern conservative and advocated for the expansion of the military. He was also a staunch opponent of any civil right legislation. He left the Democratic Party in 1964, due to his conservative ideology to support the Republican presidential nominee, Barry Goldwater.

He became a member of the Republican Party and was re-elected to the US Senate. Until age 100 in 2002, Thurmond still served in the Senate becoming the oldest person to serve in Congress in 1996. The following year, he became the longest-serving US senator until 2006 when Robert C. Byrd from West Virginia beat the record.

Strom Thurmond married his first wife Jean Crouch at age 44 on November 7, 1947. She was a former Miss South Carolina and later worked as Thurmond’s secretary. The couple had no children. Crouch died of a brain tumor in 1960 at age 33. On December 22, 1968, he married his second wife Nancy Janice Moore, who was the 1965 Miss Carolina winner. Nancy was 22 year while Thurmond was 66 during the marriage. The couple had four children Nancy Moore Thurmond, James Strom Thurmond, Juliana Gertrude (Thurmond) Whitmer and Paul Reynolds Thurmond.

Thurmond died in his sleep of heart failure on June 26, 2003, at age 100. He was buried on a family burial plot in Willowbrook Cemetery in Edgefield. Essie Mae Washington-Williams came out publicly she was Thurmond’s daughter six months after his death. She was born on October 12, 1925, to African-American Carrie "Tunch" Butler, who was 16 at the time and worked as a housekeeper for Thurmond parent. According to her, she did not reveal her identity while Thurmond lived out of respect for him.