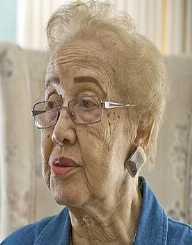 Katherine Johnson was born on August 26, 1918, in White Sulphur Springs, West Virginia, U.S. She is a famous mathematician known for her calculations in the NASA which enabled the success of the U.S spaceflights. She is an important figure as a former NASA employee who assisted the agency in complex manual calculations. She received the Presidential Medal of Freedom in 2015 awarded by President Barack Obama.

Katherine Johnson was born Katherine Coleman to Joshua Coleman and Joylette. She was born in White Sulphur Springs, Greenbrier County, West Virginia on August 26, 1918. She had portrayed an ability to do the math from an early age. At the age of ten, she joined the high school at Institute, West Virginia since she could not acquire admission in Greenbrier County for being African-American.

At the age of fourteen, she graduated from high school and attended West Virginia State, a college for blacks. In 1937, she graduated with degrees in mathematics and French and worked as a teacher at a black public school in Marion. In 1939, she left her job as a teacher to pursue a graduate math program but dropped after a year.

Katherine Johnson began her career as a research mathematician a career that was considered complex for African-Americans an women. In 1953, she accepted her first job as a mathematician at the National Advisory Committee for Aeronautics (NAC). She was among the first people to be hired into the NASA and worked as a ‘computer’ until 1958. She had to keep up with the racial segregation laws, and federal workplace segregation which was prevalent at the time.

She worked as an aerospace technologist from 1958 doing calculations including the trajectory for the May 5, 1961 space flight of Alan Shepard and the launch window 1961 Mercury mission. Among other calculations which she did later include the trajectory for the 1969 Apollo 11 flight to the Moon. She set back up procedures and charts the helped in the safe landing of the 1970 Apollo 13 on Earth.

Daughters of the American Revolution (DAR) Medal of Honor (2017), Katherine G. Johnson Computational Research Facility in Hampton, Virginia, opened on September 22, 2017, dedicated to Johnson, Honorary Doctorate of Science from the College of William and Mary, Williamsburg, Virginia (May 12, 2018).

Katherine Johnson was first married to James Francis Goble in 1939 with whom she had three daughters Constance, Joylette, and Katherine. Her husband Goble died in 1956 of a brain tumor. In 1959 she was married to James A. Johnson. She is currently one hundred years old and resides in Hampton, Virginia.