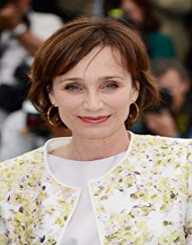 English and French actress Kristin Scott Thomas is well known for her role in the film Four Weddings and a Funeral. She has also appeared in movies like The English Patient, for which she was nominated for an Oscar, The Horse Whisperer, and Mission Impossible.

Kristin Scott Thomas was born on May 24, 1960, in Redruth, England. Her father Simon Scott Thomas was a pilot in the Royal Navy. When she was only five years old, Simon died in a tragic flying accident. Her mother Deborah then raised her, and she went to the Cheltenham Ladies College for education.

She was interested in acting from an early age and played small theater roles while in college.

Kristin Scott Thomas worked in a departmental store in Hampstead, while trying to make her name as an actress.  She received her training as a drama teacher at the Central School of Speech & Drama.

After appearing in a few TV film roles, Kristin Scott Thomas made her film debut in the 1986 film Under the Cherry Moon.

Kristin Scott Thomas was first noticed in the 1988 film A Handful of Dust. The film got her a lot of praise, and she was voted to be the most promising newcomer. She followed this with another hit movie Four Weddings and a Funeral for which she also won a BAFTA award.
In 1996, she appeared in the film The English Patient and got nominated for an Oscar award. Soon after, she was cast in the movie The Horse Whisperer.

After this, Kristin Scott Thomas took a short break from acting as she was pregnant with her first child. This was also the time when she decided to make a comeback to the theatre.

In 2001, Kristin Scott Thomas appeared in the film Life As a House and also made an appearance in Gosford Park, a critically acclaimed play.
With Winona Ryder, she played a role in the movie Confessions of a Shopaholic. She has also appeared in the film The Other Boleyn Girl as Elizabeth Boleyn. She is currently filming Darkest Hour, in which she appears as Clementine Churchill. Her last theatre role was in The Audience in 2015.

Kristin Scott Thomas won an Oscar nomination for her role in the film The English Patient. She was the recipient of an OBE award on the  Queen’s Birthday Honors List in 2003. In 2005, the French government named her a Chevalier of the Legion de honneur. She was also made the Dame Commander of the Order of the British Empire in 2015.

Kristin Scott Thomas was married to Francois Olivennes from 1987 until their divorce in 2005. They have three children together – Hannah, Joseph, and George.

The Guardian listed Kristin Scott Thomas as one of the top 50 best-dressed women in 2013. Scott Thomas has been living in Paris since 1983 and had custody of her three children after the divorce. She has also acted in a few French movies.