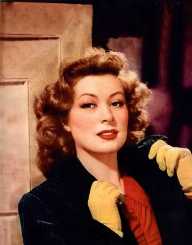 Greer Garson was born on September 29, 1904. She was an American actress. She is known to have won and set a record of five consecutive Academy Award Nominations for Best Actress. Her career in acting advanced in the 1940s but declined in the 1980s when she ultimately retired from the film industry.

Greer Garson was born Eileen Evelyn Greer Garson Fogelson on September 29, 1904. She was born in Manor Park, Greater London. She was born to George Garson who was a commercial clerk and Nancy Sophia Geer. Her father died when she was four months old, and so she was brought up by her mother. She was an only child. She attended King’s College in London where she graduated with a Degree in French.

Greer Garson later attended Universitie Grenoble Alpes where she graduated with a Degree in 18th Century Literature. She began her career as a market researcher for an advertising firm in London. She later left her job and joined the Birmingham Repertory Theatre to study acting.

Greer Garson stayed at the Theatre for two years. In 1932, she made her stage debut with ‘Street Scene.’ In 1935, she made her first West End appearance at White Hall Theatre with ‘Golden Arrow.’ Her performance was appreciated and applauded by critics. She participated in other plays such as ‘Too True to Be Good’ at the West End. In 1937, while she was performing ‘Old Music’ she caught the attention of Louis B. Mayer. She signed a one year contract with Louis’s studio. In the same year, she entered into Hollywood.

Greer Garson also starred in the biographical film ‘Marie Curie.’ In 1944 and 1945, she starred in the films ‘Mrs. Parkington’ and ‘The Valley of Decision’ respectively. Both the films were box office successes. After World War II most of her movies made losses, and her popularity began to go down since the movies were not as receptive as before World War II began. In 1954, her contract with MGM expired hence it was automatically terminated. She later began choosing which roles she wanted to appear in. In 1955, she starred in the Warner Bros’ film ‘Strange Lady in Town’ which grossed $2 million at the box office. Three years later she appeared in ‘Auntie Mame’ in Broadway. In 1960, she starred in the film ‘Sunrise at Campobello’ where she depicted Eleanor Roosevelt. In 1966, she appeared in the biographical film ‘The Singing Nun.’

In 1967, Greer Garson starred in the film ‘The Happiest Millionaire’ which was based on the true story of Anthony Drexel Biddle. The following year, she starred as a storyteller in the animated television special ‘The Little Drummer Boy.’ In 1978, she starred in the film ‘Little Women.’ In 1982, she made her final television appearance in the film industry in an episode of ‘The Love Boat.’ In 1986, she did her last work when she appeared in a documentary directed by William Wyler.