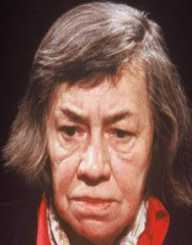 Mary Patricia Highsmith was born in the city of Fort Worth, Texas, on January 19, 1921. Her parents, Jay and Mary, were artists. They got a divorce just a few days before she was born and her mother remarried. She graduated from the Julia Richman High School in New York City. In 1942, she graduated from Barnard College, where she studied writing.

After graduation, Patricia Highsmith tried to pitch her short stories to a few magazines, but they did not accept her. She soon found jobs writing text for comic books for different publishers, such as Timely Comics and Fawcett Publications. She also became friends with Truman Capote. He recommended her for the Yaddo artist’s retreat in 1948. She spent her time there working on her first novel.

In 1950, Highsmith published her first novel, called Strangers on a Train. It achieved a moderate amount of success. The next year, the famous director Alfred Hitchcock adapted it into a film, which increased the interest for the book. In 1952, she released her second novel, called The Price of Salt. She published it under the pseudonym - Claire Morgan. It was loosely based on her own life.

In 1955, Highsmith published The Talented Mr. Ripley, the most significant success of her career. The novel follows the cold-blooded con artist and serial killer Tom Ripley, who always manages to get away with his crimes. Four more sequels followed. Ripley Under Ground was published in 1970. Ripley’s Game followed four years after that. In 1980, The Boy Who Followed Ripley was released. The last part, Ripley Under Water, was published in 1991. Together, the four books are named “The Ripliad.” They have been sold in millions of copies around the world.

Highsmith published a total of 22 novels and many short stories throughout her career. In the 1960s, she moved to Europe. Eventually, some of her books, such as The Tremor of Forgery and Edith’s Diary, achieved more significant success there than in the United States.

Highsmith’s works were adapted many times, for film, television, stage, and radio. Most of them were created in the United States, but some were made in France, Spain, and Germany.

Growing up, Patricia Highsmith had a problematic relationship with her mother. Her tough childhood led her to find an escape in reading books. She continued to struggle as an adult. She suffered from depression throughout her life. She also eventually became an alcoholic. Some people described her as cold and cruel. She preferred to spend time with her pets instead. Her experiences and personality were the reason most of her books explored dark themes.

Highsmith was a lesbian, although she occasionally dated men as well. She had plenty of affairs with married women. She never got married, and she had no children.

Patricia Highsmith passed away on February 4, 1995, in a hospital in the Swiss town of Locarno. She had lung cancer. She was cremated, and her memorial service was held in Tegna, Switzerland.

Two biographies were written about Highsmith’s life. The first one was published in 2003 by Andrew Wilson and the second one in 2009 by Joan Schenkar.

Patricia Highsmith has received honors and awards from organizations in the United States, France, Sweden, and Finland. In 1991, she was a candidate for the Nobel Prize in Literature.