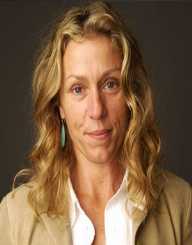 As a young adult, Frances McDormand attended classes at Bethany College. She graduated from this school with a bachelor’s degree in Drama. She later went on to enroll at Yale University, in the Yale Drama School. While attending these schools, she often appeared in school plays. She continued acting in theater after her graduation from Yale.

In the 1990’s, Frances McDormand only appeared in two major plays, but they were both off-Broadway productions: The Swan and Far Away.

Since 2000, she has only appeared in three plays, both on and off-Broadway. These plays include An Oak Tree, The Country Girl, and Good People.

Frances McDormand’s film and television career began around the same time as her theater career. However, she spent much more time working on her on-screen acting career versus her stage-acting career. Frances McDormand appeared in her first film, Blood Simple., in 1984. After this film, she mostly appeared in television shows. She had both single guest roles and recurring roles. It wasn’t until 1987 that she started to focus more on movies over television shows. Some of the most popular programs she was on in the 1980’s include Hill Street Blues, Crimewave, Leg Work, Raising Arizona, and Mississippi Burning.

In the 1990’s, Frances McDormand still appeared on the occasional television show as a guest actress, but for the most part, she was focused on performing in films. In many of her early films, she played small roles, like in Bleeding Hearts. However, she earned some of her first critical praise in 1996 when she acted as the character Marge Gunderson in Fargo. After this, McDormand became a household name and was able to take on larger roles. Some of the films she appeared in during the 1990’s included Paradise Road, Lone Star, Madeline, and Talk of Angels.

In the 2000’s, Frances McDormand continued to focus mostly on movies, but she also began working in recurring roles on television shows again. She had a voice role on the show State of Grace. During this decade, she appeared in much fewer films than she had in the past two decades. Some of the films she appeared in during this decade include The Man Who Wasn’t There, Laurel Canyon, City by the Sea, Something’s Gotta Give, and North Country.

As of the 2010’s, Frances McDormand continues in her career as an actress. Like the 2000’s, she still mostly appears in movies, but she did have one recurring role on the television show Olive Kitteridge as the title character. She has also taken on more voice roles in films like Madagascar 3: Europe’s Most Wanted and The Good Dinosaur. Some of her other movies from this decade include Moonrise Kingdom, Transformers: Dark of the Moon, Promised Land, and Three Billboards Outside Ebbing, Mississippi.

Over the course of her long career, Frances McDormand has won over seventy awards and has been nominated for over eighty others. Some of her most impressive awards are listed below.

Frances McDormand married Joel Coen in 1984. This couple has one adopted son together: Pedro McDormand Coen.