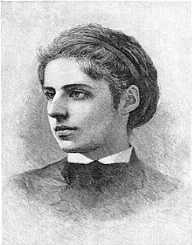 Emma Lazarus was an American poet and activist of the poor and underserved women and Jews. Her famous poetic lines adorn the statue of liberty in New York.

Emma Lazarus was born into a Jewish family of Moses Lazarus and Esther Nathan on July 22, 1849, in New York, USA. She was a descendant of migrants from Europe. The fourth born in a family of seven children, Emma Lazarus grew up in a traditional Jewish upbringing.

She studied literature and classical languages. She became fluent in four major languages, Italian, French, English, and German. From her early years, she became attracted to literature majorly poetry. She read books of famous European poets. By the turn of 1860, Lazarus started using her language skills to translate foreign poems and manuscripts into English and vice versa.

In 1867 she published her first batch of poems under the title Poems and Translations. She did another publication in 1871 under the title Admetus and Other Poems. Her prowess attracted the attention of writer Ralph Emerson. Emerson encouraged and supported her work in the years that followed. She became a regular feature on the Lippincott’s Magazine and the Scribner’s Monthly.

In 1874 Lazarus released her maiden poetry prose titled Alide: An Episode of Goethe’s Life. She tried publishing a drama script in 1876. The script titled Spagnoletto did not break through the commercial ranks. In 1881 she returned to publishing with a translation titled Poems and Ballads. The original work belonged to the German poet Heinrich Heine. Apart from Heine’s work, Lazarus translated works of many other European poets.

She collaborated with other poets and writers to create a unique brand of a renaissance in the American literary circles. She particularly encouraged young authors like Nathaniel Hawthorne and Harriet Stowe for breaking away from the European standards and creating the American uniqueness. She emphasized this in her short story Eleventh hour and her poem How Long.

In 1883 she wrote one of her most known masterpiece The New Colossus. She donated the literary work for the fundraising of the pedestal on the Statue of Liberty. She was honored by the American government 16 years after her death. The pedestal bears some lines borrowed from her donated work. After spending much of early 1880 traveling to Europe, Lazarus released another piece A Collection of Poems in Prose, in 1887. She did her last publication in 1888 in Complete Poems with a Memoir.

Lazarus translated works of German, French and Italian Jews at the beginning of her career. As the years went by, she incorporated other writers from other European nations like Russia and Britain. She slowly moved away from the traditional Jewish writers to secular writers and poets.

Apart from writing and translating poems, Lazarus was an advocate for the rights of the Jewish people. She took a keen interest in the persecution of Jews after the fall of the Russian monarchy. She helped the establishment of homes for the immigrant Jews escaping persecution in Europe. Lazarus helped in the establishment of the Hebrew Technical Institute based in New York. As such, she emerged as a brave spokesperson of the American Jewish community. She wrote two journals on anti-Semitism. The first was Epistle to the Hebrews and her book Songs of a Semite.

In the wake of the persecution in Europe, Lazarus opened a campaign for the establishment and return of the Jews to their homeland in Palestine. She is today honored as being part of the early pioneers of the call for a Jewish homeland.

In her advocacy for the poor, she spoke for rights of the domestic servant and other lowly paid workers in the American society. She fought for the secular as well as traditional Jewish liberation in society. Lazarus believed in the ideals of a free and just society for all, despite your origins.

Emma Lazarus died November 19, 1887, and was buried at the Beth Olam cemetery in New York. At the age of 38, Lazarus left a legacy of a brave heart.

She fought for the rights of the weak. In the literary world, she became the pioneer of literary emancipation of the American mind. Schools and other locations adorn her name in New York City.

She became the early pioneers of the Zionist Movement that culminated in the formation of the State of Israel in 1948. Many Jewish organizations joined in the fight for civil rights in America following in her steps in equality for all. In her ancestral Israel, she is revered among scholars as a woman who fought among men in the liberation of their homeland.