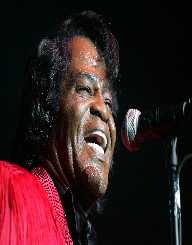 James Brown was an American who is best known for his hit songs; Papa’s Got a Brand New Bag and I Got You (I Feel Good).

James Brown was born in Barnwell, South Carolina on 3 May 1933. Brown’s mother, Susie Brown, was only sixteen years old when Brown was born. Brown's father was Joseph Brown, and Brown was meant to be named after his father, but an error on his birth certificate meant he was named James. The family was extremely poor; Brown was born in a simple wooden shack. They lived with different aunts of Brown’s and once in a brothel. Brown left school in the sixth grade and spent most of his youth on the streets. Brown was arrested for robbery aged sixteen and detained in a juvenile correction facility. Brown was musical from a young age, he played guitar and piano, and when he was in prison, he formed a choir group. Upon his release, Brown got a job working for the Lawson Motor Company.

James Brown had sang in talent shows as a child, but his entry into professional music came when he met Bobby Byrd. Byrd was a member of a band who performed a cappella and R&B sets. The band eventually settled on the name The Famous Flames. The group recorded the song Please, Please, Please, with Little Richard’s manager. The band signed with King Record’s and the song Please, Please, Please sold a million units. In 1957, the group broke up and what remained became Brown’s backing group, a second incarnation of the Flames would develop in the 1960s. Brown topped the R&B charts in 1958 with the song Try Me. 1962, saw Brown break into the pop charts for the first time. The song Night Train reached 35 on the Billboard charts.

Brown began to build a reputation and released the live album Live at the Apollo in 1963 and sold a million units. Brown continued to build on his chart success by reaching number eighteen on the Billboard charts with Prisoner of Love. 1965 brought Brown back to back chart success as Papa’s Got a Brand New Bag and I Got You (I Feel Good) broke into the top ten of the Billboard charts and topped the R&B charts. It’s a Man’s Man’sMan’s World secured Brown superstar status by reaching number eight in Billboard charts and number one in the R&B charts in 1966. The late sixties saw Brown become the definitive face of funk music and an acclaimed soul singer. Brown released three more top ten hits in this time, Cold Sweat, I Got the Feelin’ and Say it Loud I’m Black, and I’m Proud.

Brown maintained his popularity in the first half of the seventies, scoring hits with Get Up (I Feel Like Being A) Sex Machine and Super Bad. Brown’s success began to decline in the late seventies, and Brown did not achieve a top ten Billboard chart hit until 1984. The song Living in America reached number four on the Billboard charts, it was his last song to do so. The eighties saw Brown make some appearances in movies as himself. Brown appeared in the Blues Brothers and Rocky IV. Brown continued to release singles until 1998 but achieved moderate success in the R&B charts.

James Brown was nicknamed the Godfather of Soul due to his dominance of the genre during the 1970s. Brown was also known as the hardest working man in show business. Brown won three Grammys during his career, Best R&B Performance in 1963 for Papa’s Got a Brand New Bag, Best Male R&B Vocal Performance in 1987 for Living in America and in 1992 he won Best Album Notes for Star Time.

James Brown married Velma Warren in 1953 it was the first of his four marriages. The marriage ended in divorce in 1969. Brown’s second marriage, to Deidre Jenkins in 1970, also ended in divorce. Brown married Adrienne Rodriguez in 1984, and it ended with her death in 1996. Brown’s fourth marriage to Tomi Rae Hynie was declared invalid as Hynie’s previous marriage had not ended by the time of her wedding to Brown. However, she was deemed to be his spouse following a legal battle after Brown’s death.

Brown has acknowledged nine children as his own. However, it is estimated he had many illegitimate children from his various affairs. At least three other children have been proven to be Brown’s using DNA testing. Brown died on 25 December 2006 of congestive heart failure. Brown had been hospitalized days before for pneumonia.

James Brown struggled with drug addiction during the 1980s. Brown developed a PCP habit and was also known to use cocaine. He entered rehab in 1998 for prescription drug addiction; Brown was also a frequent user of cannabis. Domestic violence marred Brown's third marriage. He frequently struck his wife and on one occasion shot at her. Brown was repeatedly arrested during his career for violence, drug, and driving offenses. In 1988, Brown was charged with unlawful gun possession and served two years of a six-year jail sentence. Brown was arrested sometimes for domestic violence. In 2005 a civil case was brought against Brown for rape but was dismissed as the time limit between the alleged crime and the case had lapsed.

James Brown was an advocate for education. Drawing on his own experience as a high school dropout, Brown campaigned for youths to remain in school. For his activism, Brown was invited to the White House by President’s Johnson and Nixon. Brown also campaigned for black pride but steered clear of the Civil Rights movement in his music. Brown was also a supporter of the Vietnam War. He also worked to alleviate black poverty and campaigned against drugs in the black community. Brown endorsed both Richard Nixon and Ronald Reagan in their bids for the presidency.